December 03, 2017
It's a magic moment that Disney likes to capture.

Suddenly, the world seems trapped in a moment - birds sing, sunlight streams through the window as the gentle breeze woos the flower from the bud.  The world smiles upon me, as my mind makes a single, important realisation:


This game is too long.

I am now at approximately 90 hours of gametime, and it has long stopped being interesting.  I am sorry Wizardry fans, but this game just cannot maintain interest for its entire length.  I am aware that this game is considered one of the great RPGs of all time but, without wishing to be contradictory - no it's not.

That said - I am determined to finish it.  So let's talk about where I'm up to so far.

When last I blogged, I had been told by the Trynnie's to go to Marten's Bluff and get an idol and some magic words, both of which had been hidden by Marten.

One of NPC's, Sparkle, won't enter the Bluff because he doesn't want to go near the spider-like T'Rang, who now live there.  Oh well, I'm sure I'll find a replacement soon enough. 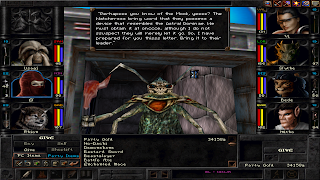 To be fair, I can see why a small rodent-like creature didn't want to meet these guys

When I arrive I see that, despite the name, "Marten's Bluff" is not a bluff but a castle.
This prompts the obvious question - how on earth did one person build or defend a castle?  Whatever.  I go and talk to the T'Rang leader who automatically entrusts me to do some secret missions, presumably because my party has "PROTAGANIST" stamped on their foreheads.

The first mission is to get a flag from the Umpani.  This is not much of a mission, because the Umpani sell the damn things.  As it happens I'm carrying one around - so I hand it over to be lavished in praise and attention.  I'm also granted a second task - kill a Rapax assassin who is lurking about the Bluff.  I'm told that the T'Rang have set a dummy in a trap upstairs, but for some reason he's not interested in taking the bait.

I head upstairs, and immediately I think I see the problem.  The T'Rang look like spiders, while the "bait" is a straw-stick figure with horns.

Of course a sensible solution would be out of the question.  So instead I pull out the "Rapax perfume" that I bought from the roadhouse in the swamp.  I put the perfume on the dummy, and get this rather disturbing message: 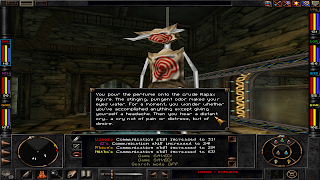 So...the Rapax has decided to take time out from his assassination mission to hump a straw sex doll, conveniently located in the middle of a giant sandwich press.

The end result is pretty much what you'd imagine.

I take the Rapax head and deliver it to the head T'Rang, who showers me in love and affection.  My next mission is to go offer the Mook an alliance with the T'Rang, and while I'm there steal the McGuffin they're holding, the Chaos Molerie.  Some alliance.

But I still haven't found what I'm looking for - the words and idol hidden by Marten.  Eventually I find a way to break into half of the T'Rang base, where I eventually find a secret area which contains Marten's diary.  It reads: 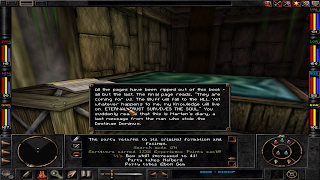 So the words are "ETERNAL TRUST SURVIVES THE SOUL" (in caps, in case I missed it).

But no sign of the Idol.  I do find an area that I can't pass because it's restricted, and doing so turns all the T'Rang hostile.  I decide to check with Uncle Google and I learn that there's a second entrance into Marten's Bluff, via a place called the "Mine Tunnels", are one of the locations in the swamp that I didn't go to because I was getting killed by Unicorns, and Sparkle was annoying me.  Well, I'm much higher level now, and devoid of Sparkle, so I go check it out.

The "mine tunnels" area is really a hill that ends in a mine cart ride.  There's little of interest on the hill, except that I come across a broken android, which I'm able to repair with some oil I found in Arnika a lifetime ago.  He joins the party - so I'm back up to my full compliment of 8 party members.

The mine cart ride at the end has an obligatory "turn the switches to change where the cart goes" puzzle.  There was one of these in Wizardry 7, although it was a water slide maze.  Also the switches in Wizardry 8 don't actually correlate to the tunnels, it's basically random.  Eventually, by trial and error, the cart delivers me to a new area, which shows me a new entrance to Marten's Bluff.  Hooray!  Maybe I'll find that idol I'm looking for?

Alas, no.  The other half of Marten's Bluff has a number of interesting items, in particular it has a power generator, a communications link to the T'Rang mothership and a teleporter.  I realise pretty quickly that I can turn the power to the teleporter off, which results in the T'Rang mothership being quickly swarmed by its own young spiderlings.  This nets me 100,000 XP and turns all the T'Rang hostile.  Hmm...might do that later - a save/reload is in order. 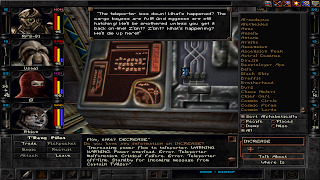 The XP is nice, but the T'Rang aren't too happy about this...

I also find that I can use the teleporter to get around the planet - hooray!

I haven't found the idol but I think I'll go visit the Umpani.  A lifetime ago they asked me to find proof of T'Rang presence at Marten's Bluff - well I've done that alright, so let's go see what additional missions they have for me.