February 19, 2018
So I've got the McGuffins three.  I need to head disarm the bomb in Arnika's tower, and get to Ascension Peak.

I know where Rapax Rift is, I didn't explore it last time because (again) one of my NPC's (Vi, this time) wouldn't head in.  But now I've got a teleport spell...so instead of walking in, I teleport in.  Bingo!  Vi follows me.  She keeps saying she's very unhappy about being there and I notice that her stats are lower, but I'd rather have a weakened NPC than none.

I could go and pick up a different one to replace Vi, but annoyingly NPCs don't level when they're not in your party.  So all NPCs that I haven't been using are woefully underpowered.  Not a great design choice that one.

So now I'm in the Rift.  And it looks like hell.  I mean literal hell, rivers of lava, demonic-looking towers, nothing growing, guys with big horns, etc. 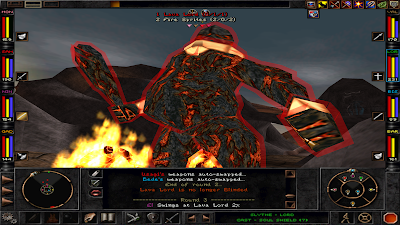 Welcome to hell.  Please respect our neighbours by refraining from screaming.

I find a Rapax prisoner who says that the Rapax Goddess/Demoness, Al-Sedexus, rules their people with an iron fist, and everyone is too afraid of her to rebel.  He also says that the Demoness has marked him for execution by the Lava Lord; he begs me to find the Staff of Ash and lift the mark of execution from him.

The area is quite circular, and I get stuck at one point when I can't find where to go.  I have to consult the internet which tells me that if I click on a fairly conspicuous support strut in a tunnel, rocks will fall and allow me to cross a river of lava.  Probably should have seen that one.

Eventually I find said Staff of Ash, although picking it up naturally summons the Lava Lord, whom I kill in about two hits.  I set the prisoner free - hooray.  What a hero am I.

There's some fooling around with teleporters, but eventually I find a key that results in me being attacked by another big bad boss monster (that I also kill very quickly), and I enter a conspicuous audience chamber in which the Demoness appears. 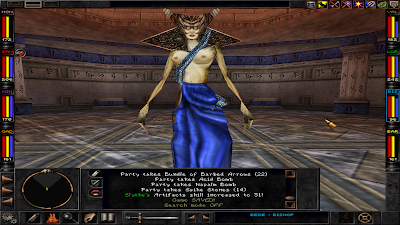 Boobies!  The snake (shown here mid-slither) is a nice touch

She tells me that I should go to Rapax Castle and join the Rapax Templars, then vanishes.  Obviously I do everything that anyone tells me, so this is my new plan.

After some hunting around I eventually find a teleporter entrance to Rapax Castle.  After a number of tedious combat sequences against hordes of Rapax (that keep respawning damn them!) I find the Rapax High Priest, who will let me into the order once I "prove my worth" by getting 4 items out of a little challenge room.

There's a touch of combat in this room (yawn) but the more interesting thing is that each of the 4 items requires me to answer a riddle!  For example: 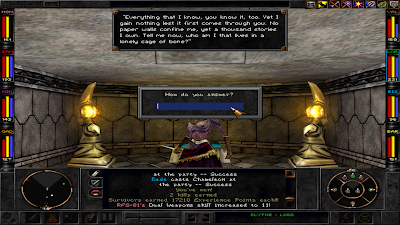 And the answer is...(spoiler, obviously): 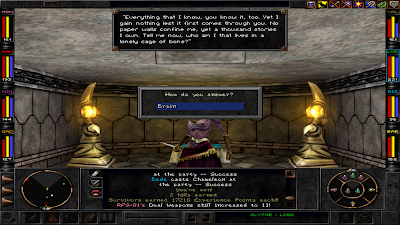 There's 4 riddles in total.  A nice change of pace; and about the right level of challenge.  Easy enough, but not insultingly so.

I get the four items; a helmet, a badge, a knife and a gown, then head back to the High Priest.  He tells me that I now need to offer the Demoness Al-Sedexus a sacrifice; I need to equip the items onto my chosen sacrifice then go into a nearby room and see if she will accept them.  I do this, and at first the Queen refuses to accept the sacrifice.  I go back and speak to the High Priest again and realise that Al-Sedexus wants a male sacrifice.  Uh...ok.  I put the items all on a male character this time and... 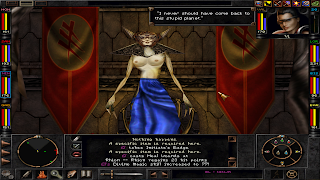 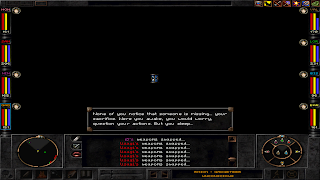 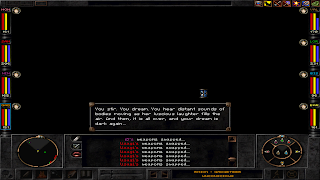 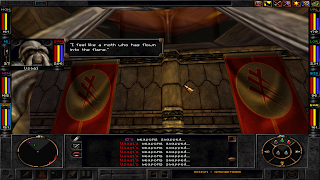 Please excuse the horrible formatting above.  My days on Blogger are numbered.

I can't believe I just bonked a demon Queen.

Alright then!  Now that I've finished prostituting my party, I go forward, write our names in a big book and we're in the Templar!  Thankfully this means that the Rapax will stop attacking me, so I can explore the castle in peace.  About time!

The Castle is fairly large, and it has a few interesting items around it such as a zoo (with animals that attack me when I inevitably flick the switch that opens the gate), a playground from when the Rapax prince was a boy, and an adult playground for the Rapax prince for when he got sick of the swing set.  Actually I walk in on the Rapax prince with his harem (a G-rated affair), who expresses his annoyance and then walks out.  And then there's...this: 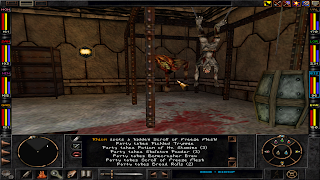 
Ew.  I get the distinct feeling though that some corners had to be cut at this part of the game.  The above room has a jar of pickled Trynnie in it, and if I give it to the shop-keeper in this Castle he gives me a key to his safe.  But there's no hints whatsoever that I should do this.  There's also a fairly non-descript item that, if I pick it up, gives me the message that my standing with the "Rapax Assassins" is now hostile.  Except that faction doesn't exist in this game - I check the net - nope, they're not anywhere.

There are some nice touches though.  For example, I find a dead male Rapax tied up in a cell near the Queen's bed.  I think we all know what happened here. 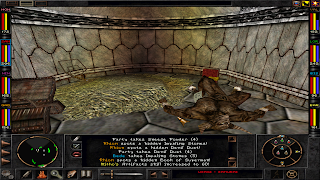 Eventually I also find some teleporters.  One takes me to Ascension Peak, and another takes me to the Tower in Arnika!  Woo hoo!  But I immediately find a problem: as soon as I enter a teleporter I get a message saying that Usagi (my PC who was "intimate" with the Rapax Demon Queen) is cursed and cannot leave Rapax grounds while she still lives.

Ok...seems I need to break up with the Demon Goddess.  By killing her.  Because that seems the only way of solving interpersonal problems in this game.  I head back to the where I first met her, and after a brief and anti-climactic combat I am officially a God-killer.  Oddly the Rapax don't seem to care though, they don't turn hostile and attack me - which makes little sense but seriously I am not complaining.

I decide though that I can't go into the Tower or Ascension Peak yet.  I realise that there's one area I didn't explore - the Rapax Away Camp.  Like Rapax Rift, this was an area that Vi wouldn't enter earlier, so before I proceed I'll go check it out.  Neither of my NPCs will enter the area, but I figure that it can't be that big, so I don't bother with the teleportation trick.

The Rapax Away camp is a wooden fort (like the Umpani one) but manned by Rapax and with a lot of tents, and no suggestions of high-tech anywhere.  After wandering around I find a tent with the Rapax prince in it again, and I interrupt him making out with Harem #2. 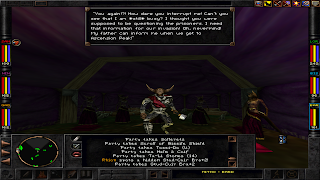 How many harems does this guy have?  Is he a demon or a bunny?

I also find a regal-looking tent with the Rapax King, who tells me that they have captured an Umpani and a T'Rang spy, and they want me to interrogate them and find out if they know about the Rapax/Dark Savant alliance.
I thought everyone knew about that alliance, but whatever.

I also find a rock prison with the Rapax Queen in it, but she won't speak to me and I can't open the gate.  Um...ok.  I suppose this pretty much proves that corners got cut in this part of the game - presumably they were going to make a sidequest here and didn't get around to it.  I go back and ask the Rapax King about the Queen, and he just says she's a traitor - nothing more.

After hunting around I eventually find the Umpani and T'Rang spies, they're locked up next to each other.  I then realise that I had one outstanding mission from both factions - find their lost spies.  I speak to the two spies, they both tell me that the Rapax have allied with the Dark Savant (I thought everyone knew this!) and so the only hope the Umpani and T'Rang have is to join forces against the Rapax.  They ask me to set them free, get them back to their respective HQ's and let them do the talking.

An Umpani/T'Rang alliance?  Cool!  I'm down with that.  I open the doors and it immediately turns all the Rapax hostile - they also tell me that they can't leave yet because they need to kill the Rapax king.

Alright well I'm not ready to turn on all the Rapax yet, because there's a few things I need from the Rapax Castle and I don't want to have to fight my way through it.  I reload an earlier game with a new plan:
By careful teleporter use, I'm hoping that I can keep the amount of incidental combat to a minimum.

Thoughts so far:  This game has so many interesting ideas in it; its a shame that the combat becomes so very very painful.