Wizardry 8 Pt 2 - The monastery, and what's changed from Wiz 7

September 08, 2017
In my last post, I covered the trip to actually starting the gameplay of Wizardry 8.  Today, I begin the actual game itself.

So my party of 6 has splashed down in a monastery.  Vi tells me that she's going to meet us in a town called "Arnika".  She says that she won't come with us, because we've just spent a year in a spaceship together and she's had enough of us right now thank you.

So I start wandering around the monastery. 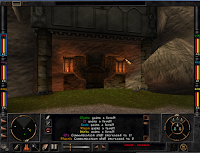 Exploring the monastery - the adventure begins

There's no-one to talk to yet, but a few monsters.  Pretty quickly I learn that there's a lot of changes to Wiz 8: 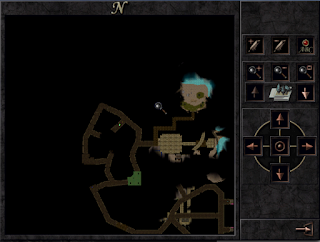 Whatever this map is, it's not a maze 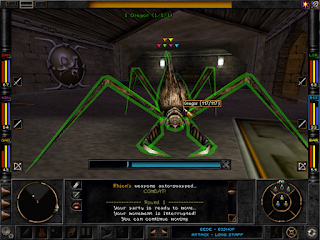 Because I transferred my characters from Wiz 7 I start at level 5, instead of level 1.  Not much of an advantage, but something.

I wander through the monastery for a while, killing creatures and so on, until I come to someone I can talk to.  And it's here that I learn about some more changes to Wizardry 8 - conversation.

It's the classic keyword conversation system, although its implementation reminds me more of Shadowrun on the SNES of all things (although Wizardry 8 came first, by a year).  When you talk to someone, they will give you a little opening spiel that may or may not contain some key words.  When you click on said key words, they will tell you what you know about the subject.  So it's like Ultima IV except that the computer automatically records most key-words for you.  Some key words it won't record, but you can add them manually. 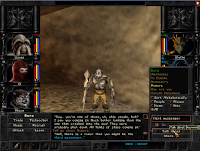 Requiring you to manually add key words is a nice touch - it forces you to engage with what's being said and helps you invest in the characters speaking to you.

The faces, of course, have that early 2000s "I am talking to a person made out of cardboard boxes" look, but it's on the right side of the uncanny valley so it's not a problem.  Although the hand-drawn pictures in Wiz 7 conveyed more personality. 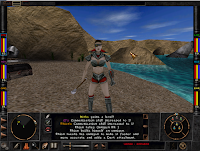 My first conversation doesn't tell me much - tells me where some towns are, tells me that the monastery is abandoned (yes I guessed that).

I also learn that Wiz 8 has a basic puzzle system - I find a glass door that I can't open.  But elsewhere I find a large bell which, when I ring it, shatters all the surrounding windows.  Hm...head back and voila!  One open door.  A nice touch, and not too heavily signposted.  Looks like I'll have to keep watch on my surroundings.

But pretty soon, I come to what must be the Beginning of the Plot (TM). 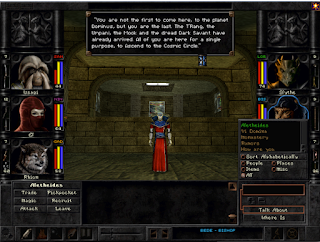 This is Aletheidies.  Likes: standing in the middle distance, recapping and hats.

All of whom are trying to "ascend to become a cosmic lord", aka "become a God".  To do this, they must "learn what a cosmic lord knows" and go to a place called Ascension Peak.  In the intro sequence, Vi explained that this actually means "collect all 3 space-McGuffins".  This isn't interactive - he says his piece then leaves.

But what is a plot without an antagonist?  Well, Ultima IV.  But Wizardry hasn't really been innovative for a good 20 years and it's not going to start now.  So que entrance of The Bad Guy... 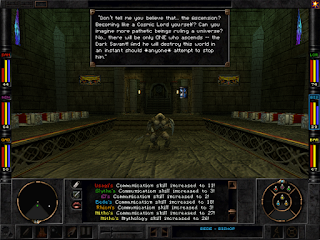 The Dark Savant will destroy the world - and your little dog too!

That was...underwhelming.  I was expecting the Dark Savant to turn up.  Maybe he's off threatening some more important PC's elsewhere, so he had to send a lackey.

Actually this pacing is very weird.  I've wandered around a monastery of all things with no explanation or direction, and without warning to had plot dumped on me, not even as a conversation but like a poster tacked to a wall.  It feels like a series of automated messages left for the lucky 1000th visitor.

Anyway, the Dark Savant's stand-in tells me that I should go to Arnika where I will see a tower, built by the Dark Savant, that will blow up and kill everyone (TM) if I interfere with his nefarious plans!  Alright I can take a hint - it's off to Arnika next.

Soon after having the plot shouted at me I come to the monastery exit, hooray!  I find myself in the wilderness, with a path in front of me.  So it's time for Quest #1 - head to Arnika to meet up with Vi, so let's do that.  I suspect that Quest #2 will find me pretty soon upon my arrival - the only question is, will it be something other than "rescue Vi from kidnappers".  Bets anyone?

Time spent so far:    Approx 10 hours.
Current impression: Interesting how they updated the Wizardry formula for the early 00's.  Impressive that it worked.