October 02, 2017
I leave Arnika the way I came.  My next quest is to find Marten and get the Destinae Dominus off him.  I've got a few side-quests, such as stop the tower exploding and make friends with the Mook, but I've no leads on how to do that, so I'm chasing Marten.

Marten headed towards "Marten's Bluff", which is not a bluff at all, but a castle.  I'm given some vague directions but consider that there's only one road and not many branches off it, I just set off exploring.

Eventually I come to the Umpani base camp, which I'm guessing is where I would start the game if I'd sided with the Umpani at the end of Wiz 7.  Interestingly I can't enter the area without releasing my NPC, Myles.  Turns out certain NPCs won't enter certain areas, although I can re-recruit them when I leave.  I suspect that's going to be important.

Now the Umpani are a high-tech spacefaring civilisation.  Which is why their military bunker looks like a Roman outpost. 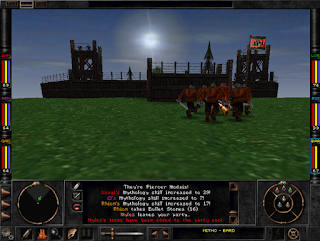 Proof that you can master space-flight but not modern engineering

There are packs of Umpani patrolling the fort, which makes any random encounters pure hell - because the combat includes your party, the enemies and about 20 Umpani NPCs.  Fortunately that only happens twice.

The Umpani are a military organisation.  I'm able to join if I go through a short training course, which unexpectedly involves some basic platforming.  Once completed, I'm given an Umpani level 1 access card and told that my mission is to go to Marten's Bluff and obtain evidence of the presence of the Umpani's sworn enemy - the T'Rang. 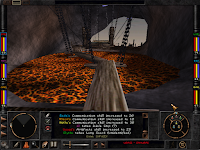 Platforming?  Oh well, it adds variety.  The training dummies are a nice touch too

This is odd - I joined the Umpani and killed T'Rang for them in Wiz 7.  They seem to have completely forgotten this.  I suppose only so much info can be transferred over from the last game - Mass Effect is many years off yet. 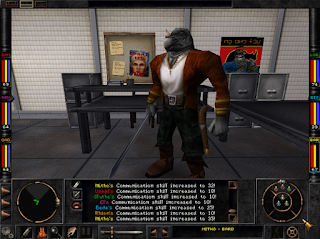 Join the Umpani Infantry! (even if you've already joined)

I'm headed to Marten's Bluff anyway, so this works out nicely.  Although in the last game I could actually join both the Umpani and T'Rang, each of whom would give you missions to kill the other.  Let's see if that happens this time.

With my new mission I leave the Umpani base camp and continue exploring along the road, until eventually I meet someone unexpected - the dragon, "Bella". 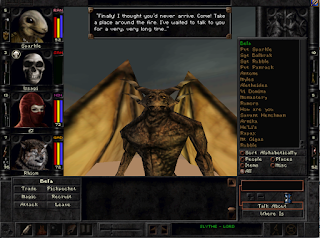 Bella - a call-back from Wiz 6

Bella was a hidden character in Wiz 6.  Including him is a neat shout-out to the long-term fans, but it also emphasises that while Wiz 6-8 had branching story-lines, it wasn't very good at recognising those branches in subsequent games.  Why do I say that?  Because if you met Bella in Wiz 6 you will either join him or (more likely) kill him.  Neither option is recognised in Wiz 8.  Bella is quite happily alive, and doesn't recognise you.  The only real call-back is that if you joined him in Wiz 6, you might have been given a diamond ring.  That ring transfers all the way through to Wiz 8 - if you give the ring back to Bella he'll take it, and you'll get a massive XP bonus.

Except that the ring is probably one of the best items in the game, so you'd be crazy to do this.

In any event, Bella suggests that when you gather the various McGuffins, deliver them to the Dark Savant and then join Bella in killing the Dark Savant.  Naturally, he won't explain why you should do this.  Quest-givers in RPGs have never been good at that bit.

So it looks like at the end of the game we'll have a choice as to who we side with, just like in Wiz 7.  Ok, sounds good.

I don't head to Ascension Peak though, as one of my NPCs will leave the party if I go there.  Looks like that's an added edge to your NPC choice - where can you actually take them?  In any event I don't need to go there yet, so I'll keep searching for Marten's Bluff.

Thoughts so far:   They wanted to be Mass Effect, but they didn't transfer enough of your prior choices from game-to-game for it to really work.  This was probably caused by the massive time gaps between Wiz 6 (1990) and Wiz 8 (2001).  Still, unique for the time.