October 19, 2017
I've explored quite a bit of countryside now.  It's fairly varied - waterfalls, grass plains, a beach, a mountain.  I've found two interesting things to come back to - namely a small crypt, guarded by an Undead Lord, and what looks like a large chapel, guarded by 3 Undead Lords, a necromancer and assorted others. 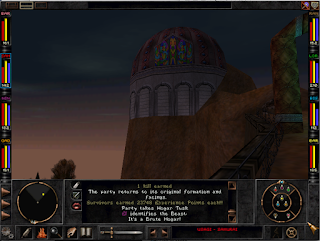 Looks neat on the outside.  One day I'll be high enough level to see the inside

I come across the entrance to the Rapax hometown, called "Rapax Rift".  Outside the entrance I'm attacked by a band of Rapax - as soon as I kill one I get a message that my standing with their faction has decreased.  Obviously they were offended by my failure to die immediately upon request.

One of my NPC's, "Sparkle" (yes really) won't enter the rift though.  So I decide to keep on walking for now.  Eventually I come to a swamp, where I meet what's presumably a Lousiana-steroytpe (named "Crock" of course) running a shop.  He tells me that after Marten's Bluff, Marten went to "the Sea Caves", which are to the North.  He also sells me some "Rapax perfume", and tells me that it will attract some wild Rapax that's wandering the swamp.

Not quite sure why I want to be humped by a wild Rapax, but I'm assuming this game will stay G-rated.  Although Wizardry is big in Japan...

So I head North to the Sea Caves, and much to my surprise I'm accosted by none other than the Big Bad DS himself. 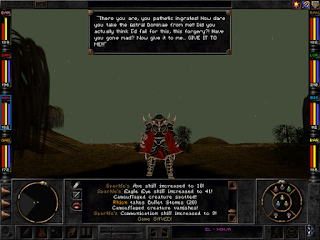 The Dark Savant also enjoys the middle distance.  Perhaps all NPCs in this game are just very wary of personal space?

Ok - that was unexpected.  I'm sure this will make more sense in the future.

I pick up the fake Astral Dominae and continue North.  I then get my butt roundly whipped by some black unicorns. 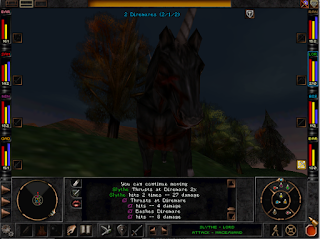 I feel like I'm having a boxing match with a horse.  Unsurprisingly, I'm losing

Urg - enough of this.  Let's pick another direction.

I continue to wander West, and this time I come to the Trynnie town of Trynton.  The Trynnie live in a big tree, and although it's pretty neat and makes a nice change of pace, I can't help but think it reminds me of something... 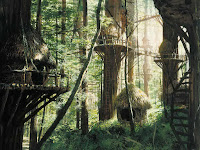 I learn that the upper reaches of Trynton have been invaded by large rat-people.  I'm paid to go up there and kill the "breeders", forcing them to leave.  When I get up there, I learn that the rat-people are the Razuka from Wiz 7.  Further they are completely sentient and fairly reasonable.  They don't even seem to understand that they're trespassing.

So now I'm going to kill a bunch of pregnant women in an effort to wipe out a species.  With all of these magic scrolls I'm picking up I'm surprised at least one of them isn't a scroll of cease-and-desist. But I suppose that wouldn't be "heroic".

But before I slaughter the helpless mothers, I get talking to the head of the Razuka crime family.  They recognise me from Wiz 7, then tell me that they've stolen the DS's Astral Dominae, but they'll sell it back to me.  It's 90k gold pieces.  I wonder if there's some part of this encounter that I'm missing?  A quick check on the net informs me that - no, I'm not really missing anything.  There's no quests involved, I just buy the Astral Dominae and that's that.

I spent the entirety of Wiz 7 trying to get this thing, and failed.  Now I'm going to buy it in an item shop.  The word "anti-climactic" is not strong enough.  Oh well - I pay the money, take the McGuffin and then head out to complete...what was it I was up here for?  Oh yes - murder! 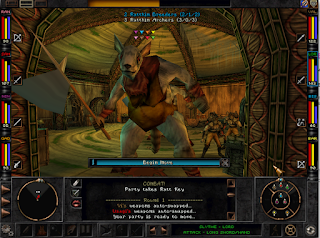 I don't know many women in birthing suites who wear plate mail and carry polearms.  I imagine the midwives are rather timid

That was easy.  I go back to Trynton for my reward.  When I'm back there, I co-incidentally learn that if I eat certain flower petals and drink a potion at a certain point, I can meet the Trynnie Shaman, who can "aid me on my quest".  Ok... 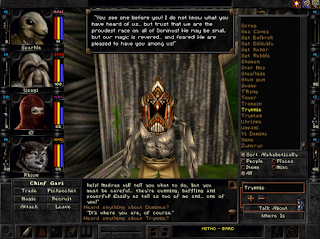 The Shaman tells me that Marten is dead, because he stole the Destinae Dominus hundreds of years ago.  He foresaw my arrival, and left some special item in Trynton for me.  But to get them, I need to go to Marten's Bluff, get an idol and bring it back.

I think it's worth acknowledging that if Marten's theft was hundreds of years ago, the glue on his "wanted" posters back in Arnika is really impressive.

The Shaman then vanishes, as plot-dispensers seem want to do.  Oh well, looks like it's off to Marten's Bluff to meet the T'Rang.  I've got one of the three McGuffins in hand, feels like the next one isn't too far off.