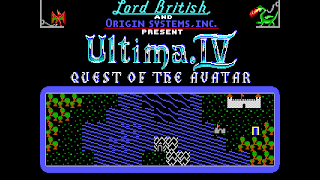 I have mixed feelings about this.  One of the very first games I had for my PC (once we upgraded from an Apple IIe) was Ultima V, and I never figured out what the hell was going on with that game.  But I've heard so much about the Ultima series, particularly Ultimas IV-VI, that I couldn't miss this.

I've finished Ultimas 1 - 3 recently (I might do a retrospective) and honestly they weren't that good.  So it's with mixed feelings that I click "install" on Ultima IV...

First impressions - there's a lot of "feelies" with this game.  Maps, manuals, a spell book, quick reference card.  They started doing this with Ultima III, and I recall that reading them is pretty essential.  So I print them all out (thanks work!)  and read through them. 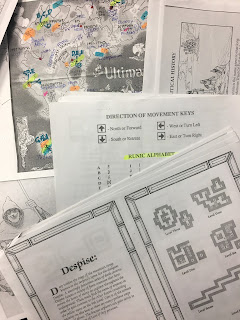 Yes, you really do need to read all these.  Closely.

Its about 80 pages.  And it's not that interesting.  A description of the map layout, lists of armour, weapons and monsters, overly-detailed descriptions of the spells (a trick they've obviously kept from Ultima III).  I know disc space was tight back then, but isn't so much "world building" as "info dumping".  It could've been summarised or (even better) worked into the game.

I grind my way through the material, then FINALLY start the damn thing, expecting more of the same of UIII.

Pretty soon I can tell that U IV's reputation as the turning point in the series is well deserved.  The mechanics are straight out of the earlier games (overhead view of UI, "gate" system from UII, combat from UIII) but the big change isn't combat based - it's the "Talk" function. 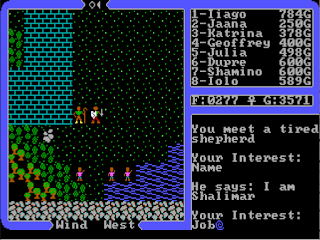 It doesn't look like much, but this textbox radically changes the experience

In U1 - U3 you would "talk" to characters and they would always repeat the same one line of text.  And usually it would be the same ("I"m a wizard!").  Yawn.  But in U4 most of the characters have individual names, and you have to ask them about specific words based on their unique dialogue.

The effect is that, next thing you know, I'm writing a list of every character in every town, with one or two words about them or (if it's obviously important) the precise hint that they deliver me.  I am already more invested in this world than I was in any prior Ultima game.

They've also learned how to give the player enough guidance to avoid the "what on earth do I do now?" problem that plagued U1 - U3.  I'm 5 hours in now, and I haven't checked a walkthrough once. 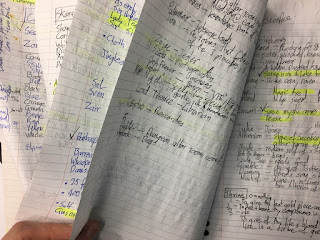 My notes.  Unless you use a walkthrough, you'll need to make them too

So what's the game actually about?

Well after having defeated the various "uber-villain of the week" nasties in UI - III, Lord British, who now rules the world (which no longer looks like Earth) has summoned you from your world to show the people of Britannia how to live like good people.  You do this by becoming the "Avatar" - the living embodiment of the eight virtues, which are Honesty, Humility, Sacrifice, Spirituality, Compassion, Valour, Justice, Honour, Salt and Sugar.

Why you would do this I don't know.  I'm pretty sure that on Earth, the life expectancy of "living embodiments of goodness" is about 33.  Anyway...

You become this "Avatar" by collecting various trinkets that increase your rating in each of the 8 virtues, and not doing naughty things that lower your virtue ratings.  So no more "killing all the guards for XP".

On the surface, this sounds very different from the earlier Ultima games.  But practically it isn't; there's no real difference between searching for the "Rune of Honesty" or the "Silver Ring of Kicking Minax's Butt".  The gameplay is still wandering from town to town gathering clues and occasionally entering dungeons to get trinkets.

The difference is that for the first time, I am really invested in the world of Britannia.  There are mechanical incentives for me to actively interact with the characters of Britannia, and even treat them more like normal beings and not creatures I can slaughter for the hell of it with impunity.

It seems (and I could be wrong) that the basic goal here is to collect a Rune, Mantra and Stone for each virtue, then go to a Shrine for that virtue and chant there.  Once you've done that for each of the 8 virtues, you go to the "abyss" and read a "codex".  Don't know what that last part means yet, I imagine I'll find out.

Oh - combat and magic.  I should say a word about both.

Combat is really a refinement of UIII.  When you enter a fight from the overworked map, you zoom down into a battle screen where you move around your individual party members and attack the individual monsters.  The refinement from UIII is that sometimes there's terrain providing cover from missile weapons, and either you or your enemy can escape by leaving the map.  Also, while you no longer create a party of adventurers, you can recruit up to 8 additional characters (one for each virtue).  So it feels like a bit of a mix - there's no more character creation, but it's not quite as diablo-esque as UI and II. 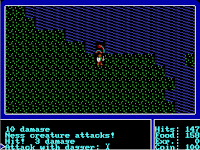 World combat in Ultima I (top left) to IV (bottom right).  In both Ultima I and II combat visually changes in dungeons, but mechanically remains the same

The magic system is a bit weird.  In UIII, the game came accompanied with a "book of spells" which gave overly long descriptions of each spell including what ingredients each required and how to cast the spells.  Practically this information was irrelevant to gameplay.  UIV has taken that idea to the next level - you still get the book of spells, but this time you need to read each spell description for the spell's ingredients, buy the individual ingredients and mix them together (ahead of time) to make each spell that you wish to cast.  Each time you cast a spell, you use up those ingredients, so you're often buying them in bulk.

Cleverly though, Origin has used the ingredients consistently.  So Sulfurus Ash, for example, is necessary for all flame based spells.  They then tell you that certain other spells (such as "Kill") exist, but won't tell you the ingredients - you've got to figure it out by reading the spell descriptions and guessing what ingredients would be required.

It's a good example of how a minor tweak has made this game so much better than UIII.  All of this information was there in UIII.  But only in UIV do I mechanically have a reason to care about it.