When they first turned D&D into a computer game, Andrew Greenberg thought "Hey, with computers, we can hide all the dice rolls and use fancy graphics instead of cheap miniatures and paper maps!".

So Mr Greenberg made Wizardry.  And it was good.

By 2017, computer graphics had advanced to a stage that was previously undreamed of.  Lighting effects, subtle shading, smooth interfaces - computers could suddenly render life-like moving images instead of the crude wireframe of Wizardry days.  And then Rob Lemon thought "Hey, with computers, I can show all the dice rolls and use fancy graphics to show cheap miniatures and paper maps!".

So Mr Lemon made Galactic Keep.  And it is also good, although I wouldn't hold your breath for a Japanese spin-off. 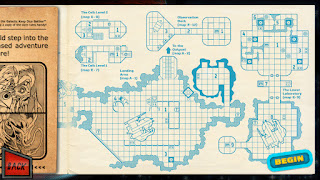 Galactic Keep uses your phone (cost approx $1,000) to faithfully represent a second-hand map-based "fighting fantasy" that you might pick up at a garage sale (cost approx $20).  The map even has coffee stains on it.

If, like me, you were an old-school RPG fan you probably thought "This is fantastic!  Why hasn't anyone done this before?".  But then if you think about that some more, you'll realise that you stopped playing Fighting Fantasy for a reason.  Then you'll think "Why would I ever want to play this?"

Well before I get to that, I should probably explain how the game works. 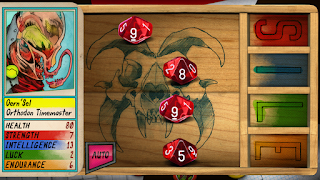 Choose your character.  Roll 4D10 for stats.  Ask Mum for a lift home.

You start off selecting one of a number of pre-made characters (very HeroQuest-y), then roll 4D10 to add to your starting stats (very D&D-y) then select one of about 3-4 available "special weapons" (very Space-Hulk-y) and then the game starts. 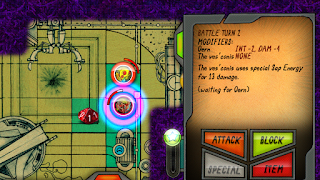 Combat!  Roll for save -vs- eternal nerddom

Each turn you "roll" a D10 to move about the grid-based board, which is revealed to you piece-by-piece in accordance with line of sight.  When you come across a monster, you "roll" for initiative (which I enjoyed far too much) and each combat round you choose one of four options - attack, block, special and use item.  If you survive, you win XP and treasure.  If you die, then you don't.

Which brings me back to the question - this style of gameplay has been dead for decades.  Why would you want to play it again now?  The short answer is that, appearances deceiving, this is NOT a faithful reproduction of a 1980s boardgame.  Gilded Skull Games have really hit the nostalgia nail on the head here by making it FEEL like such a game, and so giving you the warm fuzzies of yesteryear, but making it play like something else.

So does it work?  Well, yes.  The nostalgia value, fun of exploration and challenge of combat will keep players of my vintage sufficiently interested for the 15-20hrs of game time.  The plot will also remind you of 2000AD, so there's a double-nostalgia whammy. 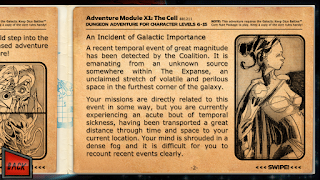 Would it be fun without the nostalgia?  Probably.  The game presentation and conceit is unique enough that I suspect that anyone would enjoy it, and as I discussed above, it doesn't actually rely upon old-skool mechanics, so it should be pretty approachable to people with an RPG-bent.  It would not, however, be very good for people who've never played an RPG before.  There is very little handholding here.

I should return to the plot, because it's not very good.  There's too many ideas being thrown around that aren't properly developed.  Your goal is to recover secret government codes that have fallen into the wrong hands, and on the way you'll stumble upon at least two sub-plots that don't relate either to your mission or to each other.  I imagine the writers sitting around and going "Why don't we make the plot about recovering "launch codes" cold-war style?  Ooh - and mad scientists!  Ooh - and time travel!  Ooh - and a conspiracy!  Ooh - and...". 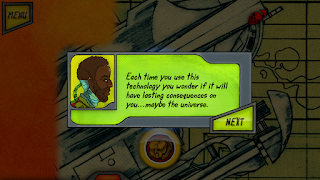 Destroy the universe?  Surely this plot thread will be important! (spoiler:  it isn't)

There is one old-skool gaming convention that is worth a mention on this game, and that's the difficulty.  Despite the combat having only four options, it takes a surprisingly long time to figure out how to avoid slowly dying each combat.  I played it on "hardcore mode", so this is probably my own fault.  I did this because in the standard mode characters don't die, you can just switch back to them almost any time you like.  That was just too jarring for me to stomach.  But later I realised that standard mode has an additional crutch - you can restore your health by simply not moving at the end of every turn.  So the challenge can either be "pretty basic if you play conservatively" or "utterly impossible".

Eventually I gave up and looked up some tips online.  They pointed out there was a certain special attack that was a bit OP - once I did that, the game became fairly easy, if occasionally heart-stopping.

I guess I should've just turned off hardcore mode.  But hey, if I wasn't the stubborn sort, I wouldn't be Mr Backlog would I?

In the end, I'd be quite happy if Gilded Skull Games came out with a part 2 to this game.  Maybe they could even resolve a plot thread or two.  I wouldn't hold your breath though - I asked GSS about this by twitter and e-mail and their response was decidedly silent.  I guess accolades don't necessarily translate into sales. 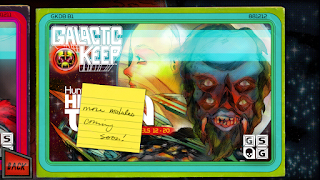 Last word:
A fun homage to the single-player war games of yore.  Accessible to all RPG fans, but not to first-timers.

Rob Lemon replied to my e-mail!  He has a few words to say about the making of Galactic Keep, and the release of Episode 2.  I'll put it up in a seperate post.  Stay tuned...