Galactic Keep - a word from the creator, Rob Lemon! 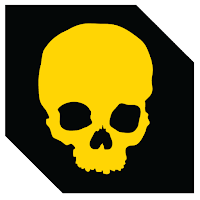 Mr Lemon of Gilded Skull Games wrote to me!  He had this to say about the making of Galactic Keep:


When I was 8 or 9 I'd play 'solo' adventures based on mythological stories where I'd make up rules for 'boardgames' with cut-out paper warriors and creatures and hand-drawn dungeons that you'd roll dice to traverse.  I think that some of them might have had elements of Ultima in them, the creatures were drawn to look like they were blocky, simple video game characters.  Looking back, I was almost doing the opposite of Galactic Keep:  Making an analogue version of a video game.

Later, I’d watch my highschool D&D group play from the sidelines. I probably should have focused on becoming a DM but the guy who was the only DM that I knew was somewhat intimidating, a rule stickler. He guarded his games in a way that made me feel like I wasn’t ‘into D&D enough' to actually play.

Before Galactic Keep, I had worked a lot on creating digital versions of books as art projects, creating a book in a digital space, adding animations and linking through it to create a tangental story. I think that Galactic Keep was an attempt at digitally representing a tabletop game in a similar way. It wasn’t about the graphics at all, as you mentioned, it was about capturing something analogue digitally, taking the tediousness of calculating hits out of playing while still retaining the feeling that there was math involved every time that a character did anything.

He also had this to say about Galactic Keep part 2:

We were planning on releasing another episode, episodes actually! Several are in the works. I think that life has gotten in the way, for now. We have to pay the bills. We currently don’t have a timeline for releasing new content but we would really like to. Recently, in my spare time, I’ve been working on an RPG card game. I’m also thinking of making an actual tabletop game (with Galactic Keep…).

Interesting!  As I said in my original post, I think he'll need to re-jig the rules to make GK work in the real world, because what's "fun" in GK-digital will not be "fun" in GK-analogue.  I'm imagining a board game that's really more like a pen & paper RPG, a bit like Inquisitor, or how some people play D&D entirely with miniatures and a map.

And lastly, he had this to say about the making of the game:

I am the game designer. I also wrote the game, drew everything and worked on some of the sound effects. It took some time, almost 6 years! It was certainly, by far, the largest project I have ever worked on.

6 years!  I will never complain about the amount of time I spend writing this blog again ;-)

And in other news, I officially hate the way this blog displays quotes.  Something else to try and figure out...