Stories: The Path of Destinies (completed)

I caught up with an old school mate of mine for a quiet drink after work.  3am I stumble home...one of those evenings.

The next morning was not a keyboard morning.  It was a flop-on-the-couch-ow-I-hate-myself morning.  Ultima IV, therefore, was out.  So I started playing a more friendly-looking zone-out game that I got for free through PS Plus, called Stories:  The Path of Destinies.

Like Dust: An Elysian Tail, this title makes less sense the more you think about it

This was a game that I enjoyed a lot more when I was hungover.  Mechanically the game is Streets of Rage with RPG elements.  But that's not the game's unique selling point - is that: 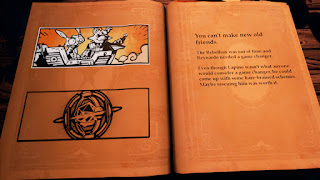 The best part of the game

The real success of Stories is that the choices are both engaging from a story and puzzle perspective.  It's not immediately obvious where the choices will lead you, but with a bit of thought it is possible to head in the right general direction. 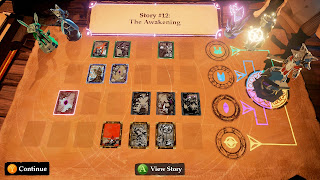 The "story screen" (above) is the mud-map that steers you in the right direction.  There are 24 possible endings.  Each ending will teach you one of four different pieces of information.  You need to learn all four (and use them) to unlock the "happy" ending.  The best part of the game is figuring out what choices to make in order to reach endings with new information. 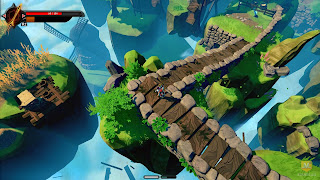 Exploring the world - more fun than it looks

The downside is actually the gameplay.  It worked great when I was hungover - no real strategy, no real thought.  Exploration is pretty interesting, the writing and voice-over work strike that right balance between seriousness and self-parody.  For example, I was genuinely amused when I swung my sword and missed a few times, and the narrator said "Reynardo loved waving his sword around!  Swish swish!".  Ok, full marks, I wasn't expecting that.

But towards the end of the game, when you've seen mechanically all the game has to offer (and doubly so if you're not brain dead anymore) you'll quickly find the endless fighting an annoying inconvenience that merely delays you from the real fun - making the next choice.  It works quite well for about 4-5 hours.  But more than that... 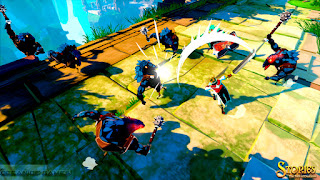 I hope you like these enemies, you'll be seeing them a lot

The game is only about 8 hours long, so you'll probably finish it anyway.  And the developer ws obviously aware of the problem because they've got a few tricks to keep you engaged.  Namely they (1) award an XP bonus each combat based on your performance, so you're encouraged to master the fighting system, not just beat it; (2) have an advancement tree and some new items that change the mechanics a tad; (3) allow you to use said new items to access new areas and shortcuts and (4) introduce a few new enemies in later run throughs.

Still, you're looking at a minimum of 5 run-throughs to finish the game.  It was always going to feel a touch repetitive by the end.

It's probably a good example of good game length.  It's fun for 4-5 hours, a bit annoying for the next three.  If the game went any longer you'd probably quit out of boredom - but fortunately it doesn't.  This is an important decision - it would have been very easy for the developers to pad out the game by just adding some additional enemies.  They didn't, they obviously were confident enough in their product that they thought it could stand as a fairly solid 8-hour experience.  And it does.