May 12, 2017
A certain small person who lives in my house doesn't like to sleep.

A few months ago this meant I was perpetually bouncing him on my knee.  Which is how I finished Wizardry VI and VII.  But now it means that I am spending many hours sitting in a room, one hand thrust through a cot, saying "there there" with the other hand on my phone.

So I've been playing a few iOS games.  Fortunately the awesome crew at Extra Credits (a youtube channel I subscribe to) recommended a number of iOS games worth playing in their great "Games You Might Not Have Tried" series.

The first I turned to - Templar Battleforce. 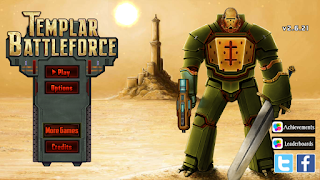 The more perceptive of you may have spotted a certain influence upon this game.  Which is ok, because Space Hulk is pretty awful (with the exception of the 1993 pseudo-RTS).  But I do feel rather like that kid whose parents keep buying him "He-Guy" and "GI Jack" toys from the $2 Shop.

Still, I trust Extra Credits, so I'm willing to give it a shot.

And I'm glad I did.  This game is the game that Space Hulk should have been, if it weren't based on a board game for 12 year olds, and if Games Workshop actually gave a crap about quality.

It's a turn-based tactical shooter.  You command a squad of not-space-marines ("Leviathans") in a sprawling campaign involving the not-Tyrranids ("Terrox".  Although "Xerox" may be more apt) and occasionally their human not-unitologist allies.

There's about 50-odd levels.  Which (a la Space Hulk) can very quickly get dull unless there's sufficient mechanical depth.  Fortunately, Trese Brothers have managed to do just that. 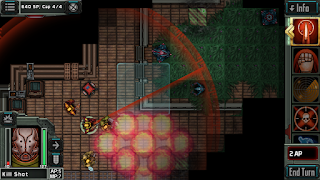 Four Leviathan vs a not-genestealer

The way they keep it engaging is threefold - the advancement tree, the missions and the story.  Each are successful to varying degrees.

The game has RPG-elements because of course it does.  Each mission the individual survivors gain XP, but your squad gains "requisition points".  You use said requisition points to unlock new classes, powers and equipment.  As characters level up, they are able to access different/better powers and equipment.  Fairly standard so far, but the real kicker is (1) the classes and powers are actually materially different, allowing for a broad range of strategies and play-styles; and (2) you can re-spec your team at any time between missions.  So you can try a wide variety of play-styles, and even select specific ones for different missions (if you know or suspect what's coming up).

A lot of games try to do this but few succeed to the level that Templar Battleforce does.  For example, two of the "sniper" powers are disable armour ("piercing shot") and increase critical chance ("headshot").  They actually require different playstyles because the first talent is more reliable, but means that the sniper needs a supporting soldier to place the killing blow.  "Headshot" means the sniper can go solo, but it's riskier because you can't rely on criticals.  You can take both, but you'll be at lower levels in each skill than if you'd concentrated on one.

Borderlands really could learn from this. 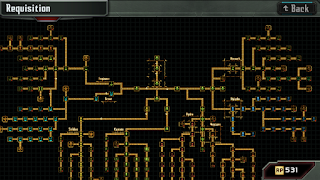 The requisition tree.  It doesn't even fit on the screen

The missions are also surprisingly varied, considering that you'll mostly face the same enemies.  Despite having 50-odd missions each map is unique, and about each 10 are in different environment (desert, inside a ship, inside a palace, etc).  Some missions have special events, some require you to "take and hold", some just need you to push through.  But the best ones allow you to use any combination of turtling (holding supply points allows you to access more men and supplies) and blitzkrieg to reach the objectives.  Again it's the flexibility that makes it intriguing.

Finally, the story.  I feel a bit sorry for Trese Brothers here, they really have gone to great lengths to create a backstory complete with different houses, past events of note and varying personalities. And to an extent this works - there is definitely a plot that definitely makes sense, and is interesting enough to follow.  The game is much better for having it there.  But it's not a complete success though because (as Ultima III showed) having backstory is one thing, but getting the player to engage with it is another.  So there's some big deal with the "Narvidians" (who control the Terrox) corrupting Human-build AI and the "sundering" and something something....but apart from eventually killing a Narvidian, it's not something you really engage with so it's hard to care enough about to follow.

It reminds me of walking into a conversation between two Battletech-nerds who speak at you excitedly about clans, houses, events and people like you should already know (and care) about what they're on about.

But while you mightn't engage with the backstory you will engage with the plot - you get that some humans are working with the Terrox, you get that the "Narvidians" control the Terrox and that both the Terrox and Narvidians are bad so therefore the traitor is bad.  This is a lot better than Trese Brother's last attempt, "Star Traders", which is set in the same universe but gives the player zero reason to care about all this backstory one iota.

Overall?  Yeah, this is a good game.  A real good one.  It took me maybe 20 hours to finish, but despite its depth it's well suited for iOS because you can play one or two turns then put it down.

Oh a word on the Space Marine rip-off thing.  I was curious as to why a game with this much love and attention poured into it wouldn't just bite the bullet and get the 40k licence.  Games Workshop aren't exactly picky about handing it out.  So I actually e-mailed the creators, and this is what they said:

"I'm glad you enjoyed the game.  It is set in our original Star Traders universe, and is the 5th game released in that world / franchise.  We're working on the 6th now, Star Traders: Legacy of Shalun.  While we do understand why people see 40k inspirations in Templar Battleforce, it is not featured on our list of inspirations (Dune, Aliens, Mechwarrior, Firefly, Battlestar Galactica) and we have never had any interest with working in IP that we don't fully own -- it sounds both exceptionally limiting, and exceptionally unrewarding as you haven't built something of your own.  Andrew Trese"

Can't fault their logic really.  They have put a lot of work into their own backstory so I can see why they were reluctant to be forced to operate within the confines of someone elses'.  And heck, it's not like Space Marine isn't itself a blatant Starship Troopers/Aliens rip-off.

After getting this e-mail I went and tried Star Traders but as you've probably gathered it wasn't anywhere near as good.  I don't know how similar it is to the original 1974 Star Trader but I found it nothing but a skinner box where you kept hitting the same buttons over and over to make your bank balance increase.  Sadly it was a skinner box I lost about 5 hours too, but in my defence I was on "pat pat there there" duty until 2am at the time.

You can buy it on Steam or iOS