I've actually played more than that, but I really need two blog posts to talk about what's happened in that time.  There's two, maybe three blog posts left to this game (including this one).

But today I want to deal with an important announcement.  Ladies and gentlemen, I'm pleased to announce that since my last post, I have become the Brittanian embodiment of all that is good and true.  I, am an Avatar. 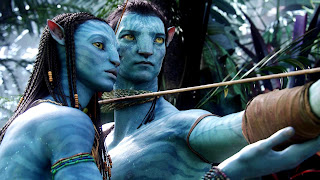 This, of course, had no effect on gameplay whatsoever.  Turns out that my task is only half done, I still need to go to the "Abyss" and read the "Codex".  Apparently there is no kindle version.

I had assumed that becoming the avatar would, at least, let me recruit all of the companion NPCs.  The manual tells me that there's one NPC in each town, each town is associated with one virtue, each virtue is associated with one character class and that NPC's will only join you once you are sufficiently advanced.  I suspect that this unnecessarily complex chain of logic is going to become a hallmark of the series.

But even after becoming an Avatar, there was one companion, "Jaana", that I simply could not recruit.  She kept telling me I wasn't advanced enough for her to join me.  Jaana is a Druid, who are associated with "Justice".  Apparently even in fantasy times, hippies tend to the judgemental.  But even though I'm now an avatar in Justice and all the other virtues, she still won't bloody join.  This was driving me nuts.  Eventually I took to the GOG forums to fix what I assumed was a bug.

Turns out that recruiting NPC's has nothing to do with your virtues, it's linked to your LEVEL.  You can't have more companions than your current LEVEL.  And every time I went up a level,  would get a new NPC from some other town, so the problem wasn't specific to Jaana at all.  This is not explained anywhere, and is so far the only time that my level has been relevant to anything.  In past Ultima games levels only affect your hit points, they didn't even affect your stats.

The documentation for this game is about as long as The Great Gatsby (page-wise).  Why it chose to omit this little gem I don't know.

By now I am determined to get this last bloody companion if it kills me.  So I do some research on the net - I'm currently level 7, level 8 is the max.  I'm about 1000xp off Level 8, which makes me groan because this is the era of games when Xp is only given to the character that lands a killing blow, and the average Xp value per kill is about 6.  By now I have 7 characters in my party, and I'd have to make sure my PC lands the killing blow...167 times....hm.  Fuck.  That.

More research - turns out that the REAL way to get Xp in this game is to collect the various items.  Each time you do that, each party member gets about 400 Xp.

Consult my notes - there are three items in the overworld left to get, the first two are the "mystic arms" and "mystic armour", which can only be equipped by the Avatar.  They had something like this in UIII; the armour was gamebreakingly overpowerful (by now, I'm ok with that).  There's also a white stone in the overworld if I can get a "flying machine" to reach it, which is located outside the entrance to the dungeon "Hythloth".  I also need the three syllables of the "axiom", which I can  pick up on the way.

This requires more toddling around the game map.  First, I head to the NPCs who mentioned the mystic arms/armour to me, who of course tell me to speak to two other people (in two separate locations) who each tell me where to search (again, in two separate locations).  This means I have to go to travel to five seperate towns, which I am utterly sick of doing.  BUT now I have a clever plan.  I'm the Avatar, right?  So I don't have to worry about virtue points anymore, which MEANS I can run away from combat with no penalty!  Hooray!

So with a spring in my step my brave PC, Iiago, the Avatar of Justice, Truth and Valour, runs like a jackrabbit from anything more frightening than a rather stern shrubbery. 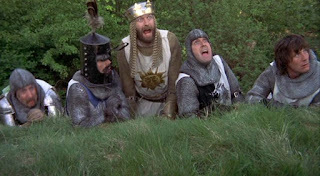 Turns out that you lose your avatar-ness if you lose your virtue points.  And now I'm back down to zero in Valour and Sacrifice.  I will have to start rebuilding them again, from scratch.  Did I mention this game has only one save slot?

It is at this point, that I utter the mantra of frustrated players everywhere - FUCK.   THAT.  There must be an easier way... 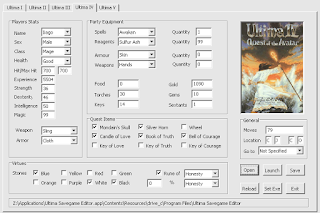 Courtesy of a little known trick called a "character editor", not only do I get my virtue points back but I become an avatar again without going to the shrines.  Hooray!  Arms and armour are where they're supposed to be.  In the same trip I learn the three parts of the Axiom - "Ver", "Amo" and "Cor".  Apparently I say combine them into a word that I use to enter the abyss - whatever.  Right now all I care about is that I'm nearly level 8, I've got the best arms and armour.  All I need is one stone from one dungeon, and I'll finally get the last companion. 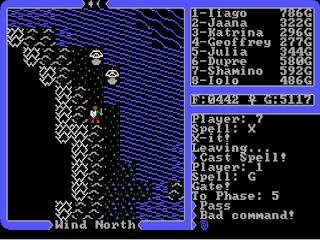 The "ankh" symbol (middle-right) keeps track of how many virtues you're an avatar in.  Each piece of avatar-ness builds the symbol into a complete ankh.  Also not explained anywhere.

So I think I've got the following left:
So what have I learned from this play session?

The designers obviously thought that part of the fun would be figuring out how the game actually works.  To an extent that works; Ultima IV is about exploration, and its tonal theme is not really about avatars or virtues, but "stranger in a strange land".  So there's a nice versimillitude in exploring the system at the same time that you explore the world.  The plot makes it quite clear that you're from Earth, you're in a strange place, and you're learning how things work.

But you can only learn the Ultima IV system by trial and error.  Which is not great when either the feedback isn't clear, or if new variables are introduced late in the piece without warning.  I got stuck on the "how do I hire this NPC" question because 30 hours in is too late to start referring to my character's numerical level, at least without some sort of guidepost.   I got stuck on the "virtue point" issue because I didn't know that losing virtue points still mattered until it was too late.

It's fair to say that if I'd bought this game back in 1985 I probably would've quit at that point.