June 27, 2017
It's 1996.  I'm wearing a T-shirt that says "The Crow", listening to Metallica and playing a lot of White Wolf.  It's lucky that the local shops didn't sell trenchcoats, because I would have bought one, worn it and dropped dead from heat exhaustion (I lived in the tropics at the time).

And then I came across this... 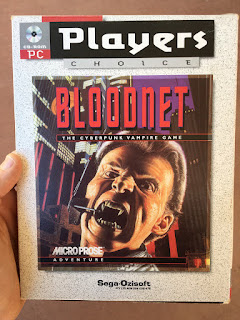 Microprose?  Cyberpunk?  Vampires?  I am SO in.  This is going to be awesome.

I get home and boot up the game.  I'm greeted by this: 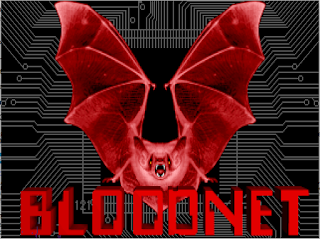 Vaguely Bella Legosi.  Not a great start.  I don't feel much better when the next page I see is this: 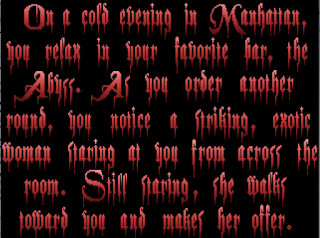 Even in my then-limited experience, polished games usually chose a font that was vaguely readable.  Still, I persevered.  And I'm glad I did, despite a few irritants I quite enjoyed the game.  I remember that I recommended it to a friend with similar tastes, and he switched it off after one line of the pretty-awful voice acting ("Your eyes they're...so intense!").   Fortunately, I had switched the voices off.

In the pre-internet days I soon got stuck and didn't finish the thing.  Now, 20 years later, courtesy of GOG, I can re-don the mirrorshades, grab my decking rig and jack into cyberspace one more time.  Let's see what my 16-year old self was getting into...

What I'm treated to is an odd mix of the clever, the effective, the inefficient and the ridiculous.  It would be easy to beat up on this game because its errors are obvious things.  But its strengths are significant and often hard to pull off, even for much bigger-budget ventures.  Let's go through them one step at a time shall we?

I bought this game in 1996, but it came out in 1993, which is around the same time of Wizardry VII, EOB III and Dark Sun.  It was a time when character-creation had more in common with an excel spreadsheet than anyone would care to admit.  Bloodnet, by comparison, does this: 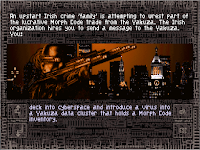 Now I love classic RPGs, but its worth noting that what BloodNet did here was not only unique, but clever because it reaches the same end point as, say, Wiz VII, but manages to do so so in a way that involves world-building and character development.  It's obviously influenced by the Ultima IV and V style, but unlike those games it's pretty clear how your answers will affect the game..

At the end of the process you get a pretty detailed character sheet, and one you can fine-tune a bit.   And much as I love old-skool RPGs, this avoids one of their common problems - that you don't know what skills you need until after you play the game (hello System Shock 2).   BloodNet's guided-approached to character creation cleverly avoids that problem.

The inefficient - use of RPG elements

Which would be great if those stats actually mattered.  Here we come to the real problem with BloodNet - it's an excellent adventure game in the body of a pretty awful RPG.

Some of these skills (such as pickpocket) don't get used or are pointless.  Most are only relevant insofar as whether they are above or under a certain value.  Take hacking for instance - its only relevance is if it is above a certain value, then you are able to go to websites on the internet (sorry, "WELLS" in "Cyberspace". This game came out before the internet after all). 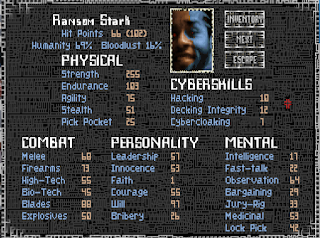 It's the same for jury-rig, lock pick and hacking.  Most of these numbers could be replaced with a simple list of skills you do and do not have; the numerical values make little difference.

The effective - the setting and premise

The introductory sequence shows that you, Ransom Stark, are a mercenary for hire (or "Shadowrunner" if you prefer) in a world essentially run by a mega-corporation called Transtechnicals.  You used to work for TransTech but were fired when you developed "Hopkins-Brie" Syndrome, a medical condition that is caused by too much interaction with VR and means you cannot distinguish between the imaginary and real.

Kicked out from the company, you are taken in by a woman "Diedre Tackett", who implants you with an experimental computer that allows your brain to function normally.

Then you're attacked by vampires. 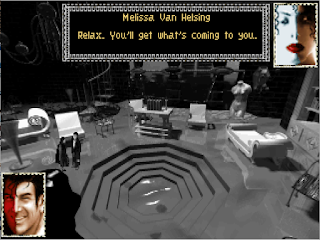 Vampire Attack.  Not as sharp a tonal shift as it sounds

Fortunately, your AI chip prevents you turning vampire immediately.  So it's then a race against time to figure out why the vampires have targeted you of all people and undo your condition before you are lose [/echo effect] your soul.... [/end echo effect].  Naturally you must also uncover and prevent the sinister plot that lurks at the heart of it all, because this is cyberpunk so of course there's a sinister plot that doubtlessly involves an AI in the internet. 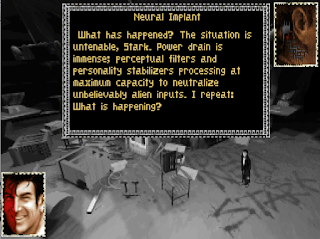 The vampirism aspects are reflected in-game by a blood-lust bar and a humanity bar; one of which you need to keep low, and the other high.  These add a sense of weight to your actions - if you just wander around aimlessly you will run out of time and lose the game. 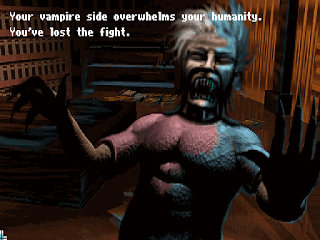 I guess this is the "bad" ending

The combination of cyberpunk and vampires is rather silly, but so is a Gears of War chainsaw gun. Overall it's a good set up - interesting and unique.  Yes it's obviously similar to Shadowrun, but it feels quite different because of the lack of elves, dwarves and other overtly magical elements.

Starting the game proper involves you going from location to location, both in and out of the internet (sorry, "cyberspace"), talking to people and learning about the world and who's who in the zoo. 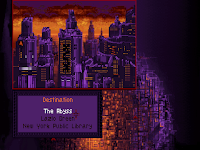 A conversation, gameplay and location select

This is by far the best part of the game.  As you speak to people you'll open up new locations and new characters.  Interesting people include "Elvis", a hacker whose brain is trapped in cyberspace and seeks a robot body, and Tim "Wild Child" Goldfarb, who tried to apply a character editor to his own brain and damaged his own personality.  I also liked the "Kafka Conspiracy", a group of student revolutionaries who keep quoting classic literature and sound like they're two days away from manning the barricades (with similarly ineffective results).

There's a lot of mercenaries for hire too, each with unique personalities and inter-relationships.  For example, the cyborg "Nimrod 7" is an effective fighter but is widely hated because he did work for the "Purity Council" (which is presumably some anti-cybernetics hate group). 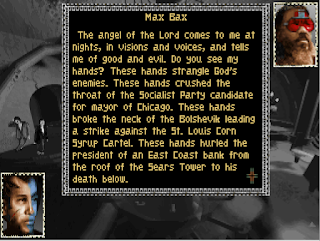 Say what you will, the NPCs are not bland

"Cyberspace" deserves a special mention for being very cool in 1993 and hilarious in 2017.  The concept is basically that, instead of viewing the internet on a screen (or even in VR), your brain is put into a digital form and directly uploaded into the internet itself.  In hindsight, why anyone thought technology would develop this way is beyond me.  But it's central to the genre. 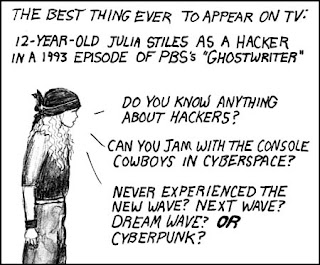 When you enter cyberspace you'll mostly wander around, bump into NPCs and go to specific internet addresses where you'll complete logic puzzles, talk to people or pick up items (oops, "download files").  It makes for a good break in pace, even though the mechanical gameplay is much the same.

How we imagined the internet in 1993.
L to R: "jacking in" intro sequence, an error message on trying to get to website without a security pass and actual gameplay (I am the green dragon, the humanoid is another hacker.  The polygons are just decoration)

Bottom line - BloodNet has a lot of varied and interesting locations and characters.  Much effort went into making a fully-fleshed out world and the work paid off.

My blog post on this topic is unreasonably long, so let's cut it in two.  Join me next time when I talk about "the ridiculous" and also a brief interview with its creator, John Antinori!