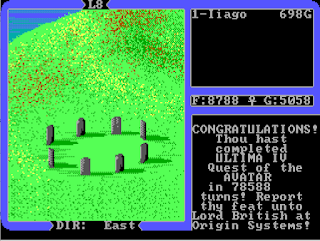 About 70 hours in.  The game is finally done.  Apparently Richard Garriott still sends out completion certificates.  When I finish V and VI and I'll have to send him the screenshot for the entire series and get the set.

So how does the endgame go?

Once you find the wheel, you need to head to the last dungeon.  It can only be approached by sea, and there's a lot of pirate ships near its only entry. 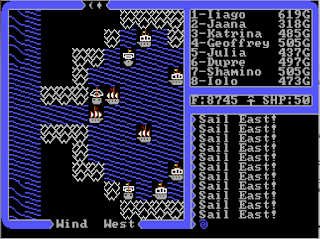 Each ship fires cannons (range 3) that do about 20hp damage and cannot be evaded.

I soon discover two things about the wheel - first, you must "use" it or it doesn't do anything (yet another thing not explained); second, it doesn't make you invincible, it just doubles the HP of your ship. 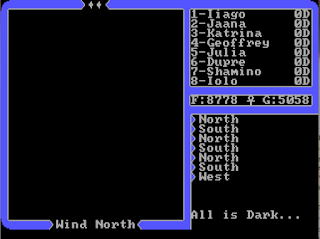 How I made these discoveries about the wheel

You don't actually need the wheel; if you defeat a ship in hand-to-hand you can take it over.  So you could daisy-chain the ships across the bay, assuming you can stand about 10 lots of combat without stabbing yourself.

Eventually I cross the bay and head ashore.  The final dungeon is surrounded by poison and fire tiles that damage your party.  You've been told by clues that you need to "use" the "bell", "book" and "candle" items to enter the last dungeon, but not told precisely where to stand.  Fortunately it's pretty obvious.  What's not so obvious is that once you use them nothing on-screen will change; there will be no dungeon entrance, you just have to "enter" anyway.  I figure that out eventually but I dance in and out of the fire a few times first. 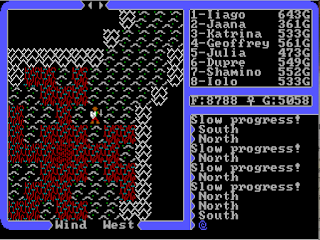 Finding the dungeon entrance was probably not intended to be a puzzle.

Before I head in I remember that I'm holding Mondain's skull (the villain from Ultima I) and I can throw his skull into the fiery abyss to destroy it.  There's no "throw" command so I "use" it on the same spot where the dungeon appears,

This of course achieves...absolutely nothing.  Reading online I learn that it increases your virtue points, but if I didn't already have those I wouldn't be here.  Oh well.

The last dungeon is by far the best.  There's a lot of rooms, and the main trick here is that they interlock like a maze, and usually the only way you can get through the maze is to find a secret passage.  Fortunately I'm using the clue book so I can narrow the search down a bit.  But the constant searching is very effective at grinding my health down, and I start to worry about running out of magic spells.  I have 99 of each reagent (the max allowed), but only about 20 of each spell.  I could have made a lot more healing spells before heading it, but you can't make spells in bulk, you have to manually combine each reagent for each spell one at a time, and I have better things to do with my time. 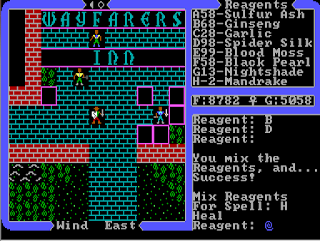 More busywork that could've been cut out

At the end of each level there's an altar where, if you "use" the "stones", you are asked to identify a virtue and enter a corresponding stone.  You haven't quite been asked these questions before, and it makes quite a good logic game actually, and again reinforces the "virtue" theme. 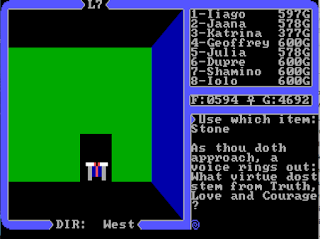 Answer correctly, and the altar turns into a ladder leading down

When you get down to the bottom there's no end boss.  There's a simple door, with the last altar and last question about the stones.  Insert the right stone and...the screen goes black.

You're then asked by a disembodied voice to state the word of passage and then identify each of the 8 virtues and 3 principles by a slightly cryptic description.  An excellent way to end the game - hammering home again that the player must not just accrue virtue points like XP, you need to engage with and understand the concepts behind the virtues.

It's another example of what Ultima IV does best - mechanically incentivise the player to engage with and invest in its word.

As you answer the 8 virtue questions, a design on the left side of the screen is slowly formed (like Hangman).  Then you're asked the final riddle: 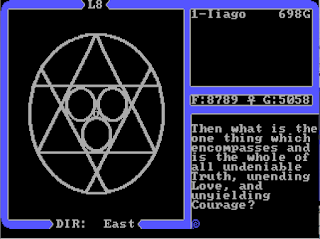 The final riddle.  Even knowing the answer, it does not entirely make sense

The final riddle apparently spawned a running joke which (I'm told) continues through the remaining games.  You see, there's a talking horse in Ultima IV ("Smith the Horse") that's supposed to give you the answer to the final riddle  But accidentally, the relevant text box is blank.  Apparently Smith shows up in Ultima V and says "Oh I meant to tell you that the answer was..."

Fortunately he's not the only clue.  Each time you master a virtue, a rune appears on the screen, and sensible me wrote them down.  I was wondering what they were for.  The game manual come with a "runic alphabet" which allows you to translate the runes, which gave me "FNYTNII".  Oh, I get it (SPOILER below): 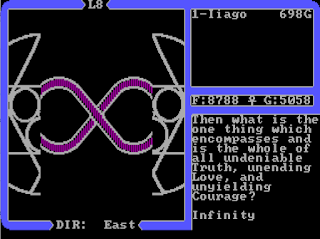 Lucky I was writing everything down

And that ends the game.  A voice tells you that you truly are a jolly good fellow, and you should go back to Earth and live as an example to everyone else (P.S.  Try not to get nailed to any bits of wood). Then you're transported back to Earth.

And that, ladies and gents, is the end of Ultima IV.

Unlike all the other games I think this one was long enough and is significant enough to warrant its own blog post with a final run down, some comments on its design and verdict on how it holds up.  Stay tuned!