June 19, 2017
Well that was a journey.  But now that it's over, why I do have to say about Ultima IV?  Let's start off with probably the most controversial of my musings; what IS the theme of Ultima IV, and what effect do the virtues actually have?


Virtues -v- Stranger in a Strange Land: the theme of Ultima IV

In my very first post I said that the theme of Ultima IV is "stranger in a strange land", not the virtues.  Was I right?

Let's look at the beginning sequence.  You'll note that the framing device clearly put the focus on you, the player, being pulled into a strange new land, NOT virtues.  Let's look a bit more closely: 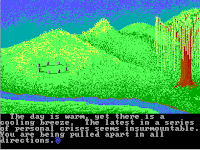 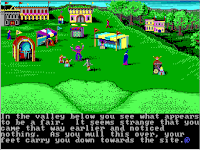 It begins with you in the everyday world, but with the mysterious circle of stones in the background as foreshadowing.  Then a portal appears, it drops a book that speaks of "a land strange to you", which you read.  You then rise "unbidden" to your feet and walk off to find a traveling fair, "strange that you came that way earlier and noticed nothing".  Then we have the very first line of text that anyone in this game says to you: 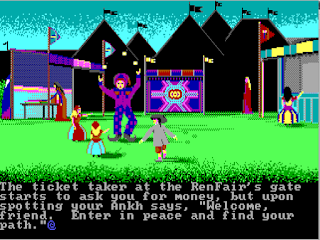 "Welcome friend.  Enter in peace and find your path".  And the second line of speech is... 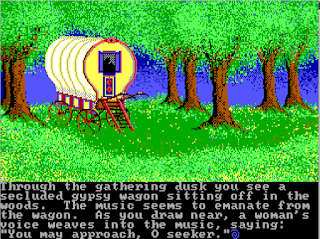 "You may approach, O seeker".  By now we've read about 15-odd screens worth of text and not a word about virtues, it's all about strange new worlds and exploration.

Then we get to the much-vaunted "virtue selection" screen.  This is the first time virtues are mentioned, but note how they are introduced: 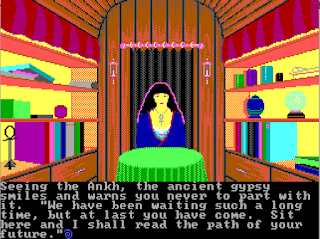 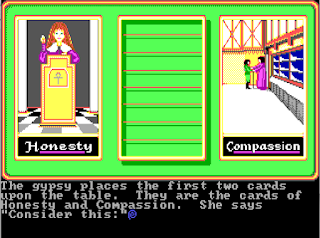 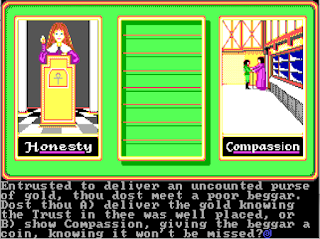 What is really happening here is that the player is being asked to pick a class.  But they don't know that, and they won't know that unless they start the game twice.  There's no explanation, no re-cap of how many virtues there are (or what they are), it's just straight into a series of apparently unrelated questions.  The player's mind is most likely going "What is going on here?" not "Is compassion better than honesty?".

The questions continue, with no explanation of what is going on until finally: 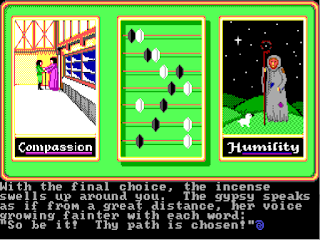 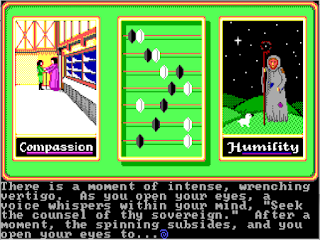 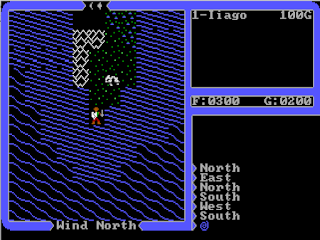 That's it.  The player starts next to a town and the game begins.

The lack of a tutorial or quest markers means the player's focus remains "where do I go and what do I do?" for a long time.  All of the early quests involve finding something (mantras, runes, shrines, etc); by the time the player realises that they even have "virtue points" there is a good chance they've already reached sufficient levels just from normal gameplay.  As I said in the very first post, there is mechanically no difference between searching for the "rune of valour" and the "silver ring of kicking Minax's butt".

The exception is if the player has been acting like a psychopath since the start, because then when they need virtue points they'll realise that they have to change their behaviour.  But even then the emphasis is less "embody the 8 virtues" and more "please stop slaughtering innocent people".

This was probably Garriott's original intent - he's said that he wanted to create the virtue system to impose consequences for immoral behaviour.  Apparently his publisher kept fan mail from him until after Ultima III, so it wasn't until then that he realised that most players weren't "role playing" at all, they were just killing everything that moved.  He wanted to add consequences for that behaviour.

Again, this probably reflects Garriott's own interest in the virtues.  Apparently once he decided to introduce a morality system, he did a lot of reading in philosophy to come up with the virtue system.  So it's fitting that the player, like Garriott himself, develops from a simplistic player-morality of "don't kill people" to a more nuanced understanding of how the virtues fit together.

So is the theme "exploration" or "virtues"?

Well, both.  It shifts from the first to the second during play.  And this shift, whether deliberate or not, is brilliant.  Because it means that once the player feels comfortable with the world of Ultima IV the game opens up and offers them a new theme to explore; it keeps the game world interesting and engaging despite its length.

Comparison to previous Ultima games and his contemporaries:

I also want to take a moment here to give Garriott a shout-out for how he was pushing himself with each Ultima sequel.  It is so easy, even today, to make sequels that are really just more of the same.  At the time, at least for RPG games, that seemed to be the standard - Wizardry I - III and Bard's Tale I - III spring to mind.

Wizardry I, II and III.  Seriously.

But each of the early Ultima games were really significantly different from the last, and elements from older games are significantly tweaked to improve how they fit together.  For example:

This is probably a big reason for the enduring success of the Ultima games.  Compare that to Eye of the Beholder; I loved the first two, but I had just stopped caring by EOB III.

Aklabeth, Ultima I and Ultima II.

So overall, what do I say about UIV?  Is it a good game?

Yes.  As I've said before, its strength really lies in how it mechanically requires the player to engage with its world, which makes the world feel alive in a way that's very rare without either significant graphical fidelity (Skyrim) or complex interlocking systems (GTA III).

This is a massive achievement considering it was designed for the Apple II.

Its biggest weakness is that its systems are not sufficiently deep to remain engaging for the length of the game.  Combat is the biggest culprit.  That could have been avoided by either adding more variation (as happens in the dungeons) or just reducing the amount of combat from mid-game onwards through, for example, special items or spells.

An interesting question is whether it would have been just as fun with a quest-log, instead of having to keep all those notes?  I say - no.  Physically taking the notes yourself is a big part of what forces you to engage with the game world despite the primitive graphics and lack of a complex world-systems (such as a day/night cycle, or NPCs that interact with each other).  I accept it's a hurdle for modern gamers, but that doesn't make it a bad part of its design.

Recommended for - People who want to see a vibrant world created out of simple elements, RPG historians.

Not recommended for - Anyone else.  I would love to recommend this game because I did enjoy it, but I think the combat is just too tedious for me to make a general recommendation.