I have made my way through the various dungeons and sorted out what the stones were for.  And fortunately my assessment of this game has strongly tipped back into the positive.  The dungeons are quite good, and I'm finally seeing some emphasis on the the "virtue" theme of this game.

When we last left off, I was about to enter the dungeons to get the stones.  I was not looking forward to this - Ultima IV combat had by now devolved to the point where I was ready to jump out of a window.  But the dungeons have three important differences:  (1) most encounters are pre-set, not random, and actually interesting; (2) the dungeons are quite small, so there's fewer random encounters than on the overworked; and (3) you can run away without losing virtue points. 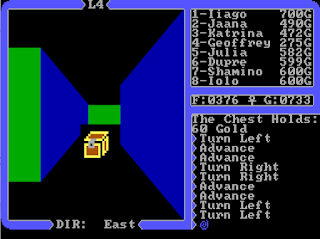 Dungeon exploration is 1st person, until you either enter a room or start combat

Far and away, the most important point here is the first one.

As you wander through the dungeons, which are quite simple compared to (say) Bard's Tale, you will walk into pre-determined rooms.  Your goal in these rooms is not to kill everyone, it's to exit the room in the correct direction and so work your way through the dungeon maze.  And the rooms, mercifully, are unique.  You will not the same damn arrangement of rocks 300 times, you will feel like you are actually exploring a dungeon.

Because the challenge is now room traversal, Ultima IV can introduce a few interesting twists on the standard combat formula.  Specifically, it adds traps and secret passages that are triggered by standing on specific spots.  This adds a feeling of exploration to the combat map that did not exist in the overworld, and also a feeling of tension when you see a lone treasure chest in the middle of a room. 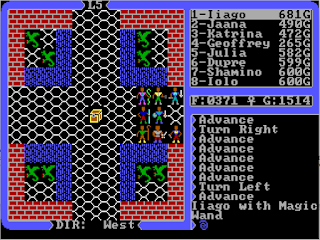 Why am I reluctant to get that chest?

There is exploration in the dungeons, mostly through finding secret walls.  But as I alluded to above, the dungeons themselves are mercifully straightforward.  By now, I have had enough of wandering around aimlessly.  Some direction is a good thing. 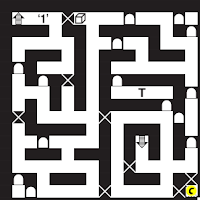 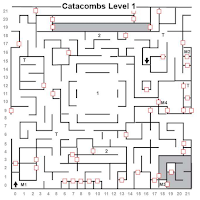 For comparison, some level 1 maps from (L to R) UIII, Bard's Tale I and UIV

Each dungeon contains two things of note - a coloured stone and at least one altar room.  The altar room/s are always at level 8, and interestingly they always have 4 exits.  Each exit links to a different dungeon, so you can travel between dungeons via these altar rooms.  This helps me find the Hythloth Dungeon and the "flying machine", which, as expected, is a balloon (eventually I learn that there's a second entrance at Lord British's castle, but I'll skip that part).

This balloon is also a lifesaver.  The balloon travels at high speed either North, South, East or West, as dictated by the current wind.  There are no random encounters in a balloon - and you can use the "wind change" spell to steer the thing.  I can now find ALL of the dungeons and travel to and from the towns without a single.  damn.  encounter.  All praise Lord British!!! 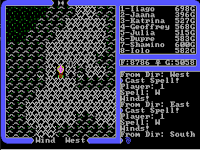 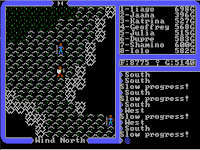 Eventually I've got all the stones.  I also find a way to strengthen the hull of my ship, although I had to look this one up.  In Serpent's Hold there's a sailor who's from a shipwreck of the "HMS Cape".  Alright, I obviously need to find it.  Ask him "where", he won't say.  Ok - go to all the towns, ask everyone about HMS Cape.  Nothing.  Give up, look online.  Apparently there was a secret passage I missed in Serpent's Hold where an NPC told me that HMS Cape had a "wheel", and that a survivor should know where the wreck is.  Duh - but he won't tell me where!  Hang on...go back to the sailor.  Say "wheel" to him - and he gives me the location.  URG.

Ok whatever, I've got all the bits and pieces now.  But what do I do with them?

Eventually I figure out that if I "use" the "stones" on an altar, I get the option of inserting 4 coloured stones.  On each altar I have to insert stones for each virtue that relates to that particular principle.  This is quite clever, because you can just use logic to figure out that, for example, "Sacrifice" is a combination of Courage and Love, and that "Honour" is both Truth and Courage.

L - an altar containing a virtue stone; R - an altar room for one of the principles

This is unique, even by modern standards.  I can't think of any other game that requires me to think philosophically about what drives "compassion".

Each time I sort out an altar I get "part of a key".  I remember reading about this...I need a 3 part key to enter the Abyss.  So that's what the stones are for!

Eventually, I've got the key, and it's time for the endgame.

Join me next time for when I finish this beast.

ADDENDUM:
It later occurred to me that in my excitement of nearing the endgame, I skipped over the negatives in these dungeons.  There is one big flaw worth mentioning - the rooms are way too crowded for a party of 8.  Your characters move one square per turn, and they can't move through each other.  So realistically only 1-4 party members will ever be meaningfully involved per combat, but you'll be forced to move each character, in order, every round.  That means it's easy to press spacebar one to many times and accidentally skip your sole effective character, and so have to wait another round before you can actually do anything that turn.

This game does not need party sizes of up to 8.  It's another example of where some extra content just makes the game bigger not better.