Last time I talked in glowing terms about BloodNet's adventure game elements, particularly its world and its characters.  Unfortunately, the same cannot be said for its combat.  The elements are there for it to work - it's pseudo-turn based, there's a range of different mercs for hire, there's different damage types and lots of different weapons.  There's even vampire powers. 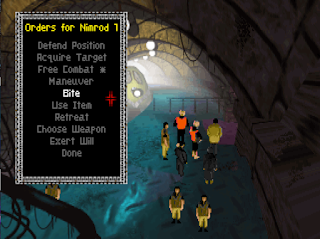 Combat.  Less tactical than it looks.


But it feels like a sore lack of play-testing resulted in these different pieces being glued together in haphazard ways.  For example: 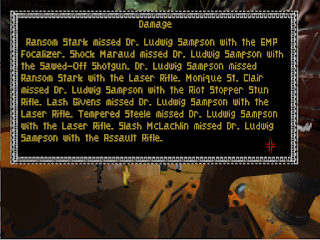 Another exciting round of combat.

Interface design has come a long way since 1993.  Even taking that into account, the UI is atrocious.  You will often make five clicks where you'd normally make one, and it's not intuitive.

For example - take the inventory screen.  Each character has 20 inventory slots in their backpack, but you can only see the first four at any time.  So with 6 characters in the party, you're carrying 120 items but you can only see 20 of them at once.  This rapidly becomes a nightmare when you're trying to find certain items or give them to certain people. 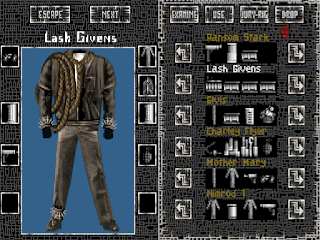 Who has the laser rifle?  Click here 20 times to find out!

Sometimes the UI is so obtuse that it becomes its own puzzle.  For example, in one spot, you have to line a coffin with some dirt.  Both coffin and dirt are in your inventory.  Do you click "use" on the coffin?  No.  Do you click the "coffin" icon then the "dirt" icon?  No.  Drop them both?  Use the "jury rig" command? No and no.

You first "drop" the coffin, then "use" the dirt.  This brought back memories of early point-and-click adventure puzzles, and not in a good way.

I enjoyed BloodNet.  It revels in its supernatural-cyberpunk aesthetic in a way that simply could not be done today unironically, and it nails that aesthetic even better than, say, Syndicate.

In fact I preferred this game to Syndicate.  BloodNet's best is better than Syndicate's best (which I found to be a rapidly-monotonous click-fest), and you could set Syndicate anywhere really, but BloodNet is inextricably linked to its own little world.

But ultimately BNet was an overly ambitious project that needed more playtesting to ensure that its parts came together (a problem Syndicate did not have).  Here's a few other things that QA should've been picked up:
Recommended for:        Lovers of 90s cyberpunk, adventure game enthusiasts.

Not recommended for:  People who play games for the combat, who can't look past clunky UI or who won't enjoy the campy feel of a 90s genre piece.

A word from the creator!  Introducing Mr John Antinori:

I am thrilled to say that Mr John Antinori, one of the designers on this game, saw fit to return my e-mail!  This is what he had to say about the game:

Q. Lawrence Schick is listed as having the original concept, how was he involved?
A. Lawrence was the EP for Microprose. Our company, Paragon Software, had distributed our games through Microprose for a few years before Microprose purchased Paragon. We later separated from MP and formed Take2. Over lunch at an Oliver Garden, Lawrence suggested that our next game be about cyberpunk vampires. It was a great idea. Lawrence was always great to work with and supportive of our team.

Q. Did you have a real passion for cyberpunk at the time? I see you also did Hell and Bureau 13 in this era...?
A. I didn't even know what cyberpunk was after Lawrence made the suggestion. I deliberately avoided reading any of the novels so as to not be derivative. Working on the game left me with a great passion, though, for all things cyberpunk. It all seemed so new at the time. And so we followed up Bloodnet with Hell and Ripper, feeling we had said all there was for us to say about Vampires.

Q.  If you can forgive me for asking, did something weird happen during the game’s development? I ask because the “adventure game” aspects feel quite polished...but the RPG elements feel rushed...Is there a reason?
A.  As you note, the game was kind of a hybrid adventure game / RPG. We jettisoned the RPG elements once we got to Hell and Ripper. I think those games suffer from the lack of it. Though, as you note, the combat system isn't perfect. The game wasn't rushed, but our deadlines were always tight.

Q.  Was there supposed to be a sequel?  A company called Megalo Music claims to have written the music for it, but otherwise there’s no mention of it (it was supposedly called "Bloodnet 2000").
A.  I don't think the sequel was ever meaningfully worked on.  I certainly would have objected to a title like Bloodnet 2000. Especially since Bloodnet was set well into the future past 2000!

Q.  How did you feel about the end product, and were you happy with its sales?
A.  We were all really proud of Bloodnet. The team was dedicated and great to work with. It was well reviewed and sold well by the standards of the time.  It remains one of my favorite things to have worked on.