Wizardry 8 Pt 3 - Road to Arnika and the combat system

September 15, 2017
When we last left our heroes, they had left the monastery and were headed to Arnika to meet up with Vi (aka "Cyborg no-pants").

This turns out to be more difficult than it sounds.  Not because of nefarious traps, puzzles or mazes - but because the simple of act of "walking along a road" invites more attacks by random strangers than a video clip by Anita Sarkeesian.

This is more noticeable than in the monastery because there's no exploration.  No rooms, no statues, no branching paths.  Just a road.  Seems as good a time as any to talk about combat in more detail - considering there's nothing else to look at right now. 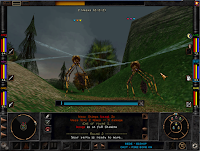 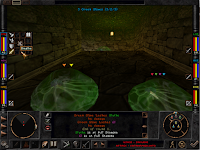 Combat.  Single perspective for the PC's, but monsters represented individually

I touched on this last time, but combat in Wiz 8 has changed a lot.  It needed to - the Wiz 7 combat system was basically unchanged from 1981.

Brief history lesson - the combat system in Wiz 1 - 7 was menu-driven, or text-and-turn-based.  Think classic JRPG except using only words (they had graphics, but they were irrelevant to the gameplay).  This had precisely one advantage - it was very fast; commands could entered very quickly and the results shown even faster.  Its obvious disadvantage was that it was repetitive - the player had few real choices per round.  The only variety to player choice was whether to use a spell and if so, which one - which probably explains why Wizardry and its ilk often had a legion of spells to experiment with.

The system was tweaked many times by other RPGs since its introduction in 1981; Dungeon Master and Eye of the Beholder deserve special mention there.  But Wiz 8 wisely chose to update entirely - the old system wouldn't work with 3D anyway.

So what, precisely, did they do in the new system?  Well, the temptation must have been to go down the path of Fallout (1997), Baldur's Gate (1998) or Vampire: the Masquerade - Redemption (2000) and individually represent each party member on a battle map.  But that would've made two massive shifts in the Wizardry brand - first, you'd probably have to reduce the number of party members and second, you'd have to shift from first-person perspective. 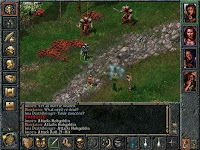 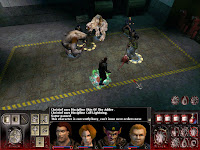 Bravely, they did not do that.  They'd obviously decided that they needed to go full 3D (this was 2001 after all).  So what they did was take their turn-based "blobber" combat and put it in a 3D first-person environment.  That was brave because it was unique; I can't think of any other game which has done that.  It was against the trends of the time so it was a gamble, and gameplay-wise it worked.

The party was still a single entity, but each monster was represented individually.  This gave the monsters a number of new tactical options - swarming, keep their distance or a mix of both.  The player also gained new options because their attacks/items/spells could operate differently depending on range and the shape/size of any AoE.

They've tried to also give the player some added flexibility by letting them move their party members to one of five zones within the party formation (front, left, right, rear and centre).  This adds a bit of strategy but not much; the monsters can move so quickly that moving your mage to the "rear" doesn't  do much. 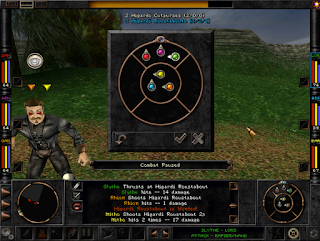 Formation screen.  I could move PCs to the "left sector", or just rotate the party left.

All sounds good so far, but as we saw in Ultima IV, individually representing monsters has one massive drawback - it takes ages.  Combat rounds in Wiz 8 easily take 3 times as long as in Wiz 7, sometimes longer.  It also takes more mouse-clicks because in a menu-driven system you automatically go through the PCs in order, but now you have to click on the character you want to issue the orders to first.  That's one more click per PC, so it's an additional 6 clicks per round of combat.  It gets annoying pretty quickly.

So far combat is interesting, but it's an open question as to how long it will stay that way.  Hopefully they'll force me to keep changing my strategy by introducing new monsters types/groupings, and new spells/abilities.

After quite a few battles, and passing the same tree graphic about 50 times, I eventually reach Arnika.  Step 1 - find Vi; step 2 - become a God. 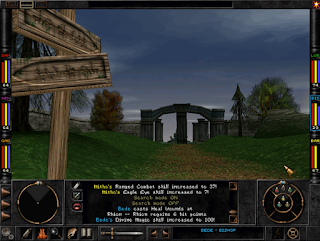 The gates of Arnika.  Godhood awaits!  Also probably a lot of reading

There may be a few intermediary steps between 1 and 2, I guess only time will tell.

Time spent so far:      Approx 20 hours
Current impressions: Combat is basically the old system placed on a 3D plane.  Whether it stands up long-term will depend on whether new monsters/spells/items require me to develop new strategies.