I head into the Sea Caves.  Crock, the storeowner in the Swamp, told me that Marten, the person I'm ostensibly chasing (when I'm not doing side-quests for the T'Rang and Umpani) went to the Sea Caves, so there should be something here.

The Sea Caves are actually quite pretty.  They're beach caves, not underwater.  There's quite a few crabs around, who are actually a high enough level to be interesting-ish to fight, even with my magic back. 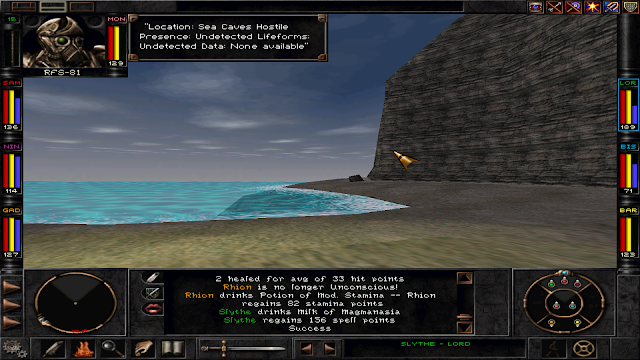 Oddly, I like the look of this place.  I think it's the effective lighting in the sky

I have no clear goal so I start wandering around again.  I find a hook and line (am I going fishing?), a sunken ship and sledgehammer.  Then I find this: 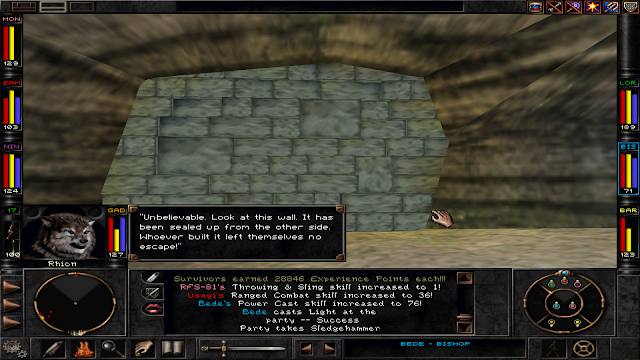 I am reminded of the Cask of Amontillado (https://en.wikipedia.org/wiki/The_Cask_of_Amontillado)

The fiendish puzzle here is obviously to hit the wall with the sledgehammer, which was cunningly hidden immediately outside the wall.  Oh Wizardry, truly Rubix has nothing on you.  The sledgehammer brings the wall down, and shows this: 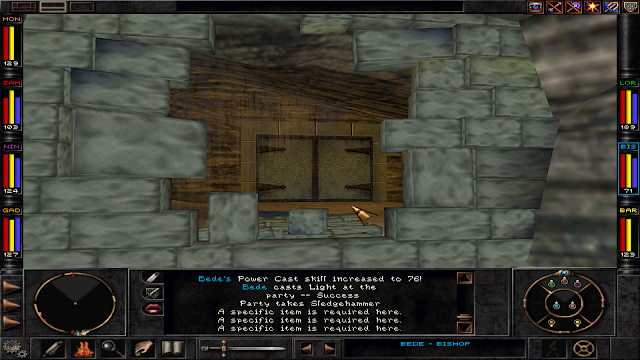 Of course I can't use brute force to open the door.  Because doors are, of course, impenetrable barriers with no natural weaknesses - conversely a wall is naturally weak because it's designed to be opened regularly.  Actually this little bit of illogicality starts to grate me - "door" is another word for "bit of wall that can be opened".  It is inherently weaker - it must be weaker.  That's why thieves carry crowbars, not sledgehammers.  I imagine the toughest wall in the world of Wizardry is one composed entirely out of doors.

I can't open the door, so I keep exploring.  Soon afterwards, while exploring a lower level, I get an alert telling me about a hole directly above me, with a beam that a hook and rope could be attached to.

Yet another taxing puzzle.  Truly, I shall be stumped for hours. 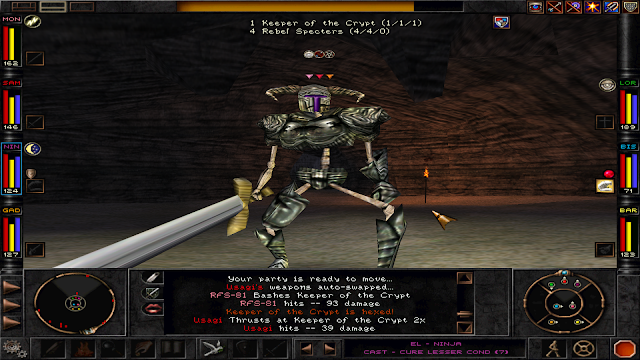 I wander around for a bit, and find some pretty good loot.  But that can't be it, there must be more.  And then I find this.... 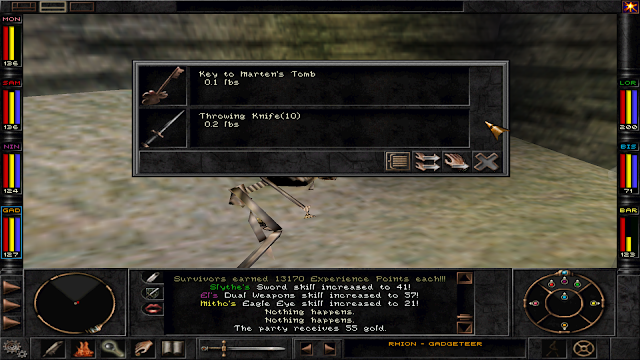 WOO!  There's definitely going to be something here.  The key doesn't work on the front door, so I realise I'm not in Marten's Tomb, I must be next to it.  Hunting around a bit I find a passageway that I can't cross because of a gap in the middle.  The edges of the gap are slippery, and I slide straight down the hole as I get close, to find some broken wood pieces down the bottom.

That's obviously a clue.  I guess I need a wood plank to cross the gap.  Didn't I see a shipwreck on the beach?

I leave the cave and head to the shipwreck - yep, there's a plank of wood in the middle.  I get it, and head back to the cave.  I also find some spiked shoes, which I equip on one of my party members simply because they were good armour.  But when I approach the hole armed with my plank I realise that the spiked shoes were part of the puzzle, because when someone's wearing them, I don't slip.

I can't pretend I solved that myself, that was just a coincidence.  Still, pretty cool.  See Wizardry, you can make neat puzzles that don't require telling me the answer straight out!

I use the plank of wood and plop across, using the tomb key on a locked door on the other side.  And guess what I see? 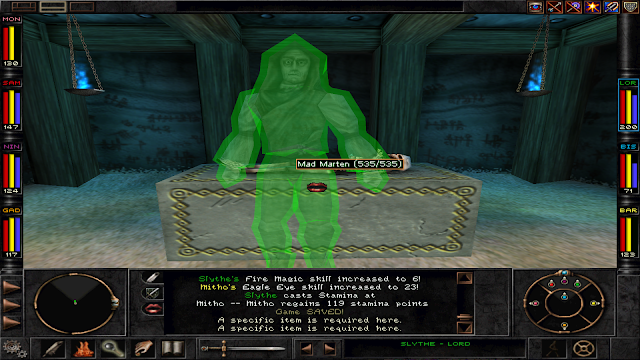 Ok, so he asks me some basic questions, then asks what I want.  I have to check google to remind myself of which exact McGuffin Marten has, it's the "Destinae Dominus".  But when I say I want it, he replies: 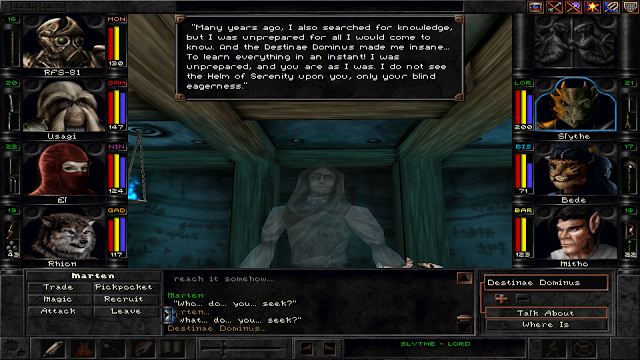 So let's get this striaght - you won't give me the Destinae Dominus, and thus the key to power over the universe, because I'm wearing the wrong hat????  MY GOD I had no idea the secrets of the cosmos had a DRESS CODE.  Well, I still need to find Marten's idol from Marten's bluff.  That'll probably lead to me getting this stupid helmet.

I've finished the Sea Caves, so  I head back to the Bayjin Shallows to find that I've finished exploring them too.  So it's on to Bayjin, where I'm going to complete the Umpani Quest (find their lost men) and T'Rang Quest (find black box to get the Dark Ship's location).


Time so far:         Approx. 120 hours
Thoughts so far:  I'll happily accept broken video game logic provided it's consistent.  I will accept that doors cannot be broken down by any amount of brute force, provided it's not standing next to a solid brick wall that can.