December 05, 2017
I have a feeling that the next T'Rang mission will start to cut off Umpani missions, so it's time to check my local Rhinos and see how they're doing. 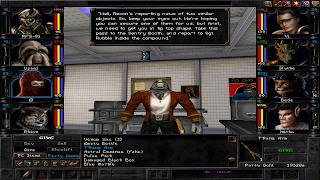 My last mission was to prove that there was T'Rang presence at Marten's Bluff.  Obviously they won't just take my word for it, I have to show them a T'Rang arm that I found lying around Marten's Bluff.  If they only accept reports accompanied by body parts then I suspect that their accounts department is unpleasant to visit.
Anyway, I'm again showered with love and affection (an almost tedious occurrence by now) and given an upgraded security pass and told to report to Sargent Rubble.  There's a prominent security door in the South, so I use the pass there to find an elevator that takes me into the Gigas Caves. 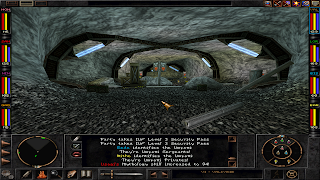 Exploring the Gigas Caves.  "Scenic" is not really the word.

The caves are visually...odd.  They look like someone has half-finished moving into them - there's even boxes lying strewn about.  There's a few lights, but otherwise it's mostly au naturale.  There's a few secrets - walls that fall down at a touch, a pressure plate that has to be weighed down, but nothing of great note.

Eventually I reach this: 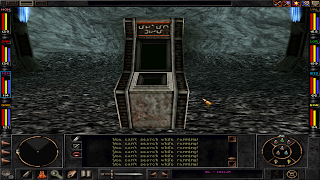 I approach the terminal, touch it and the things fizzes electricity and the back pops off, revealing three wires that have fallen out of their colour-coded sockets. 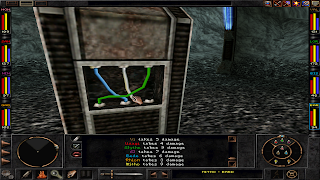 I hook the wires up according to their colours, and the unit springs to life, allowing me to unlock some doors and finally speak to Sargent Rubble.  So does this mean Sgt Rubble has been stuck behind a locked door all this time?  *sigh* - I say again, whatever. 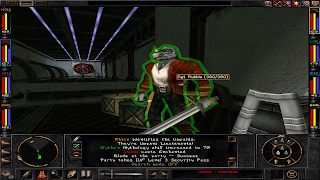 Sgt Rubble gives me a rocket launcher, and tells me to try it out on some training dummies.  This sounds exciting, but it isn't.  For starters I only have 10 rockets and no way to get any more, and secondly, by now I'm capable of casting AoE spells that make a rocket launcher feel like a gentle breeze.

Sgt Rubble then tells me to go into the "Covert Testing" area nearby, find 3 flags, and return to him.  The Covert Testing area is just another network of caves, with a few woefully underpowered monsters in it.  Yawwwwn....

The only thing of interest is there's a D'Jin.  Who looks impressive but course goes down faster than a Bieber fangirl backstage because this game obviously doesn't get how to scale enemies.  I get the flags, report to Sgt Rubble who (you guessed it) showers me in love and affection then tells me to report back to my CO on the ground floor. 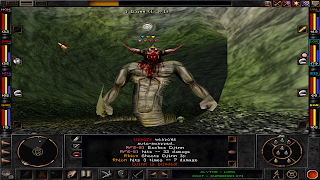 Before I do that, I decide to finish exploring the caves.  There's an area with a signpost saying "unexplored area" out the front, so there may be something interesting there.  Shock - there isn't.  Another bunch of monsters and loot items I don't need.  I have so many arrows now I must look like an echidna. 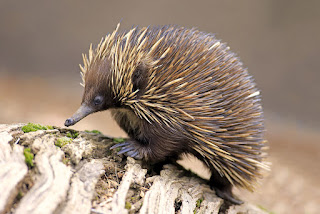 Helpful for defence, but plays havoc with your charisma score

Returning to my CO, he's amazed that I managed to successfully go up and down an elevator and immediately sends me out for an important diplomatic mission - to send a letter to the Mook in Arnika requesting an alliance.

The days of me playing both T'Rang and Umpani are probably about to come to an end.  Oh well, let's head to Arnika, where we'll be making and breaking friendships.  I guess I'll choose the Umpani over the T'Rang, I did this in Wizardry VII too, but what can I say?  I just don't like spiders that much.

It's become apparent to me by now what, precisely, the problem with this game is.  It's intended to be open-ended, approach the dungeons in any order, do (or ignore) any side-quests you wish, etc.  But that means that the game needs to make most of the dungeons accessible and sensible to a party just starting off.  They do scale the monsters, but not enough to cater for my now vastly-overpowered party.

Skyrim avoided this by having a strong critical path and lots of side-quests.  Ultima IV avoided this too...I think because it wasn't so long, had a clearer beginning/middle/end game and had better scaling to party strength.

Something to expand upon in my final Wiz 8 blog post.

Playtime:    Approx 110 hours
Thoughts so far:  The main problems with Wiz 8 are excessive length and poor handling of the open-ended design aspects.  I shouldn't be walking into dungeons towards the end of the game and still be getting items aimed at starting parties.