December 07, 2017
Just when I thought I'd seen everything.  Just when I was steeling myself for some tedious quests and entry-level loot (probably consisting of arrows) the weirdest thing happened:

I decide to side with the Umpani, so I turn up and hand them the Mook the Umpani's offer of alliance.  They open the front door, tell me they accept (because who doesn't make major diplomatic decisions at the drop of a hat) and say I can go look at the Chaos Moliri if I wish.  I then have a brainwave...this game...will probably let me deliver BOTH alliance letters, won't it?  I try it and it works - the Mook accept the T'Rang alliance as well.

So now the Mook are allied with two countries that are at war with each other.  But, as I've said before, "whatever".  I go and check out the Chaos Moliri.  Which, despite being a world-destroying artifact capable of limitless power, is stored like this: 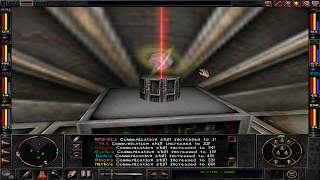 My local art gallery has better security than this.

I pick it up, and a sliding door opens with about 4 Mook guards who demand that I put it back.  The answer though, fairly obviously, is to instead place the Fake Astral Dominae that the Dark Savant threw at me for no apparent reason earlier on in the game.  Yes, it's a fake version of an entirely different artifact, but at the risk of being repetitive, "whatever".

It works!  The guards return to their featureless and windowless room to no doubt ponder the benefits of unionisation, while I am free to return to both the T'Rang and Umpani with a successful mission. 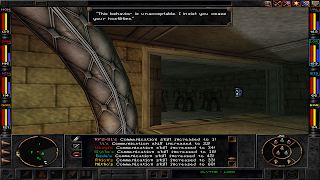 These Mook made some very poor career choices.

I go visit the T'Rang first.  I have to "give" them the Chaos Moliri for this to be a successful mission, but I correctly guess that the T'Rang will tell me to "hold on to it for now".  They have known me for about 4 days now so why shouldn't I store their most valuable artefact?  They next ask me to find the location of the Dark Savant's ship - creatively named "the Black Ship".  They say that to do this, I should investigate ships that have been shot down by the Black Ship, because these ships may have recorded the location of their attacker.  I recall that someone....the Mook probably...told me of two such crashed ships - one in Arnika, the other in an area called Bayjin.

I've already seen the one in Arnika, but its Black Box recorder is damaged.  So it's off to Bayjin then.

I also go to the Umpani to turn my mission in for them.  They tell me to go to Bayjin to find some Umpani prisoners who've been captured by the locals there.  And this is where it gets particularly interesting...they tell me that the best entrance to Bayjin is underwater.

Yep - they give me scuba gear, and point me to a network of underwater tunnels called "Mt Gigas Caves".  This may sound like just a cosmetic change, but it actually has two important effects:
I enter the tunnels, and about halfway through my second underwater combat I realise - THIS IS AWESOME. 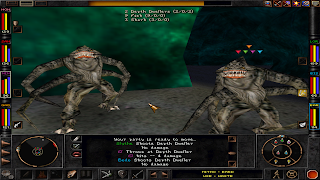 I've been focusing on developing my party's magic abilities, and by now I have 4 party members who are uber-mages capable of AOE spells that remove all challenge from the game.  Also, suffering damage has real consequences, because I can't just cast healing and resurrection willy-nilly.  I have a reason to use all these healing potions I've been collecting!

For the first time in a long time, I'm choosing my targets carefully, I'm managing stamina, I'm bothering to read who's damaging what - combat is interesting again!!  It probably also helped that Vi wouldn't enter the tunnels, so I'm down one party member. 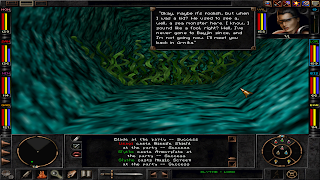 So...you'll tangle with a God-killing monstrosity like the Dark Savant, but not a Sea Monster?  Whatever.

The Sea Tunnels aren't too long, and eventually I leave to enter the Bayjin Shallows.  Immediately upon arrival though, I meet this interesting beast: 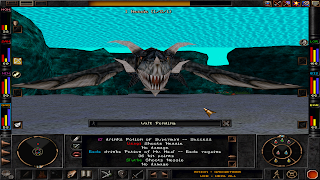 This marks the first time in the entire game that I have to run away from a combat.  Only just made it too - 6 of my 7 party members were dead when I finally escaped.  That's when I realise...I could get stuck down here.  I can't cast teleport, and all the monsters have respawned behind me.  So I'd better decide whether to press on or turn back...

I look through my items more carefully and start to plan.  After some experimentation I realise that SOME spells works, provided that they aren't attacking or debuffing spells.  Buffs, heals and such work.  So with a bit of tweaking, I heal everyone up and try it again, this time summoning an elemental to act as a meat shield: 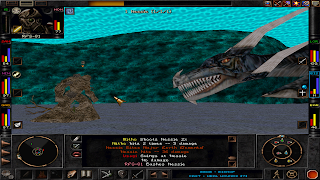 I still feel a tad outmatched.

Fortunately it works - largely due to some lucky hits by my fairy ninja.

I start exploring the Bayjin Shallows, I find a sunken ship (complete with ghost bucanneers), a way into Bayjin and a few secret chests, the best one labelled, of course, labelled "Davy Jones' Locker".

I also find an entrance to the Sea Caves.  I figure that it's probably only got one entrance/exit (though in hindsight I don't know why) so I decide to check it out then return to finish of Bayjin Shallows.

Time so far:         120 hours
Thoughts so far:   Game becomes interesting again when the gameplay is shaken up and challenge restored.