I had hoped to finish Wizardry 8 by 2017, but alas it was not to be.  I have, however, put some serious time into it over the holidays and have continued to inch my way towards its long-sought conclusion.  I kept believing I was SO CLOSE to the end but it kept running away from me, like trying to chase a rainbow.

I could continue my whining about the length of this game, but I won't.  I'll save it for the end.  In the meantime I've got quite a lot to blog about, so let's get cracking.

So when I last wrote about this game, I had found Marten, who had the final McGuffin that I needed (the "Destinae Dominus") but wouldn't give it to me because I was wearing the wrong hat.  I needed the "Helm of Serenity", and possibly a tie and jacket.

I also had three other outstanding quests/side-quests:
So, it's off to Bayjin for me.

Bayjin is quite interesting.  It's Aztec-themed but on a tropical island.  There's fish-people (called "Rynjin") who live in little huts, and who (I soon find) have captured the Umpani soldiers in one such hut.  There's a mountain with a hidden climbable trail, which is neat, and there's also a crashed ship with the black-box recorded that the T'Rang are after.

Welcome to Rynjin.  Population:  about to decrease

When I arrive, one of my NPCs tells me that there's a civil war between two rival groups of Rynjin.  This might have been a side-quest they didn't flesh out, because when I arrive the only way to deal with the native Rynjin comes straight out of a 1940s film - shoot all the natives. 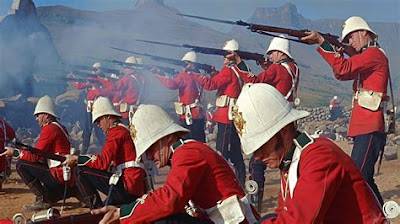 After this second little bout of genocide (you'll recall that in Trynton I murdered a bunch of nursing mothers because a ferret told me to) I find the Umpani captive, a rhino named Glumph.  He's angry about being left to rot for so long and is determined to tell the Umpani general exactly what he thinks of him.  He joins me as an NPC in the meantime.

Interestingly I also find another prisoner, a woman named Jan-ette.  She was actually in the Wizardry 7, and she says that her race of people, the Helazoids (basically high-tech Amazon women), were all being transported from the Wizardry 7 planet to this planet aboard the crashed ship outside.  They were shot down by the Dark Savant, then captured by the Rynjin.  They all died, leaving Jan-ette as the last one.  Jan-ette then promptly dies, leaving me with the Helazoid banner.

This is quite a nice touch, because the Helazoids and Jan-ette were quite prominent in Wiz 7.  So suddenly learning they're all dead carries a bit of weight.  Mind you, it would be a lot MORE effective if it didn't appear that Jan-ette died from a combination of Picasso face and improbably large boobs.

Jan-Ette in Wizardy 8 and Wizardry 7.  Turns out that jail affects your hair colour. 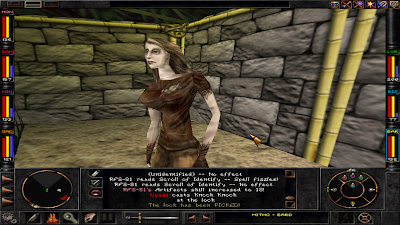 A sad case of late-stage Picasso-face-spiky-boob.  There is no cure.

Mind you, improbable boobs appear to be a quite common on this planet.  I'm going to assume it's got something to do with local genetics, gravity and the then-recent success of Lara Croft.

I see a pattern.

Alright, so I've got the Umpani captive and the T'Rang black box.  Lets finish those two quests.

The T'Rang want me to use the black box to get the co-ordinates of the Dark Savant ship.  Fortunately, I remember seeing a machine back in Arnika that did this.  So it's pretty easy to go back, and do that.  Actually it turns out to be two machines, one that I put the black box into to get the Helazoid ship co-ordinates when it was shot down, and another machine that I punch those co-ordinates into so we can calculate the location of the attacking Dark Savant ship.

Because obviously, the Dark Savant ship will still be in the same place.  Because ships don't move.

I then give the T'Rang the ship co-ordinates, and return the Umpani captive, Glumph, back to his people.  Returning Glumph is kind've amusing, he completely chickens out on blaming the general for anything and runs away complaining of nothing.  "Pride" is a powerful urge, but "self preservation" is even stronger.

But it's at this stage that it appears that my life as a double-agent is coming to an end - both Umpani and T'Rang task me to wipe the other one out.  I actually already know how to do this with the T'Rang, I stumbled across it earlier.  But how do I wipe out the Umpani?  Sounds interesting, let's check it out.

The T'Rang tell me they have an agent inside the Umpani compound.  If I say the code-word to him, he'll tell me how to destroy the Umpani.  After some hunting around at the Umpani base, I eventually learn that (SPOILER) the snarky guy who runs their shop is the double-agent.  This surprises me - why would an Umpani want to wipe out his own people on this planet?  He explains that he thinks the current Umpani general is going to lose them the war anyway, so the best option is to cause an immediate spectacular failure by the general by blowing up the base, so that Umpani HQ will replace the general with someone competent.  Yes, Umpani will die, but fewer than leaving him in charge.  Hm.  Ok, I'll buy that.

He gives me a pass card to get to the top level of the Umpani base.  Once there, I find a number of interesting pieces of equipment, but the only significant part seems to be that I sabotage a runway, then use a radio to summon an Umpani spaceship to land.  The landing ship crashes, causing a big explosion which...actually I'm not really sure what it does.  But for some reason this lone spacecraft crashing on the runway at the top of a mountain means that the Umpani base is lost, the general disgraced and the T'Rang have won the day.

Geeze imagine how the Umpani would react if they ever, y'know, lost a battle.


That was interesting, but I'm not ready to pick sides in the Umpani/T'Rang war yet.

I reload the last save, and head back to the T'Rang headquarters at Marten's Bluff.  I want to get the last remaining McGuffin, and to do that my next step is to find that damned idol, which is hidden somewhere in Marten's Bluff.


Time so far:            Approx 140 hours
Today's thoughts:  I can't believe one my missions was "murder all of the natives on this island".  I don't think you'd get away with that in 2018.  Also, I wonder if it will turn out that my characters are actually on Earth, having some horrible "Son of Sam" experience?  Maybe this game will end with us in the prisoners dock saying "I had to kill them all.  The King of the Rhino-people told me to."