Wizardry 8 - Part 12 - the last sidequests, the Retro Dungeons and the last McGuffin

January 25, 2018
I (mistakenly, as it turns out) feel like I'm nearing the end of this thing, so I think it's time to mop up the last few sidequests, although by "sidequest" I mean "explore places I couldn't when I was a lower level". 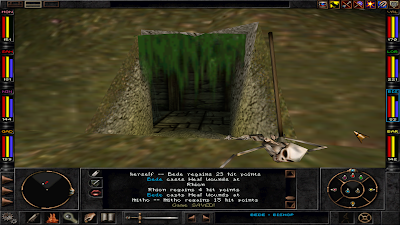 This is actually quite dull. These places look very impressive when I walked past them earlier but the monsters inside are no longer a sufficient challenge to be interesting.  The loot isn't that interesting either, because now I can use spells again I'm so bloody powerful I smash everyone into mulch upon contact.

That's the problem with an open-world RPG, you need to make sure that people are the right level for the challenges they wander into.  This was a bit of a problem in Wiz VII too; and now I think about it most "open world" RPGs of the pre-Bethesda era didn't have this problem because they weren't really "open".  The only games that adopted the now familiar "Pick a direction and start exploring" type of RPG were probably...the Ultima series (from Ultima IV onwards only) and Wiz VII.

Anyway.  Fortunately there's only a few locations that fall into this category, but while wandering around one of them I find some weird glowing runes.  Pressing them makes a "hiss" sound, and I find that there's about 6 of them hidden about the immediate scenery.  I search pretty thoroughly, press them all and nothing happens.  What's all this about? 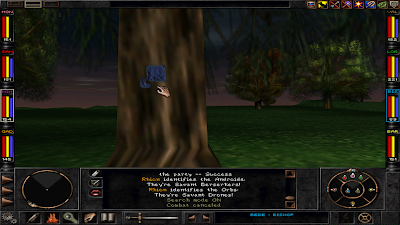 A random rune.  There's about 5 more nearby.

Well the internet tells me that these are the "Retro Dungeons".  There are three of them in the game world, and I enter each one by finding and pressing all of the runes, then using a specific weapon (which changes for each dungeon) on a non-descript piece of nearby scenery, which will only be identifiable because a "hand" icon appears when I move the cursor over it.  I then walk into a nearby mushroom circle and get teleported to the dungeon.

Interesting little Easter egg.  Although I don't see how you were supposed to figure out the "use a weapon" bit.  The glowing runes you might stumble across, how are they supposed to know which one of the literally hundreds of different items should be used on that particular tree?  The only way to find it would be trial and error - which could take days.  Fortunately the internet saves me the trouble 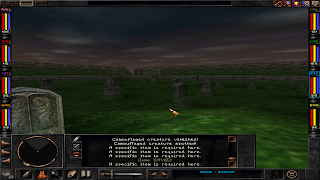 See that non-descipt corner of the graveyard?  Far off in the distance? 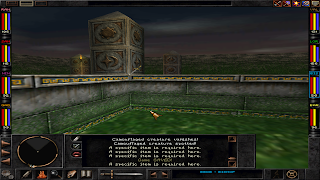 How was I supposed to realise that I needed to use a dagger (not a poniard, thieves dagger, dagger +1 or any other variant) here?

The "retro dungeons" are so-named because they're reminiscent of the earlier Wizardry games - "retro" being a relative term of course.  They're traditional-style dungeons, laid out on a grid-pattern with no decoration, have teleporters and they're a bit of a maze.  The advent of auto-map makes them quite easy to navigate, although for some stupid reason the automap only works on the first retro dungeon that you enter - after that you're on your own.

I suppose I could hand map these dungeons and find my way through by trial and error.  But no, I'm keen to move on.  Also it turns out that only one of these three dungeons has a "boss" with an interesting treasure item, the others are just...wandering twisty passages with bits of treasure and monsters scattered around.  There's no clear end or goal, they're just a bit of a laugh and a timewaster really.

The lack of wandering monsters is nice though.  Combat is boring again. 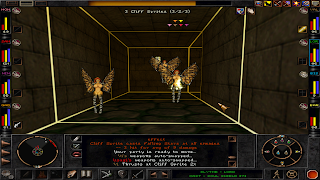 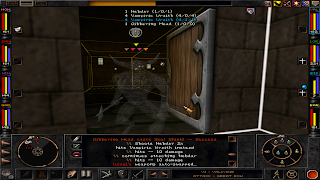 A retro dungeon in my retro game.  So meta.

I find and finish the three retrodungeons, because I'm that sort of guy.  Then it's time to get the last McGuffin, the "Destinae Dominius".

Ok - so I figure this means I have to:
I've already searched Marten's Bluff from top to bottom, but I go back and wander around for a while.  Pretty soon I recall that there was a large door near the entrance that didn't open.  I go back there and - it's inexplicably open now.  I must have flicked a switch somewhere in my travels.

I enter and - behlold!  The idol is sitting on an altar.  That was easy.  But when I take it something odd happens. 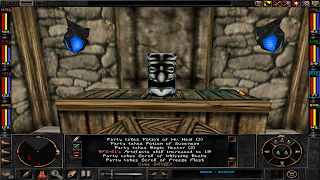 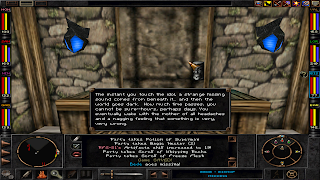 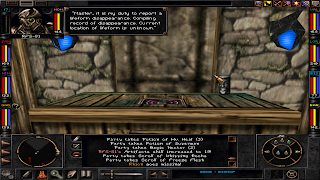 Um, alright.  I have no clues on what to do next.

I decide that before I start looking for my lost character in earnest, I might do a quick loop of the shops and see if there's any new spells available for purchase.  The first shop I decide to check out, just at random, is Crock's shop back in the swamps.  When I arrive I'm told this: 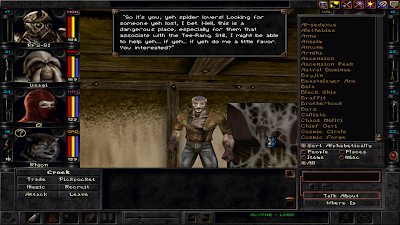 Why I would ever think of checking out the shopkeeper in the swamps for someone who went missing inside the T'Rang stronghold is beyond me.

Crock wants me to kill "Brekek", who turns out to be (a) a giant frog; and (b) insulting easy (like everything else).  I turn in the quest and get my character back. 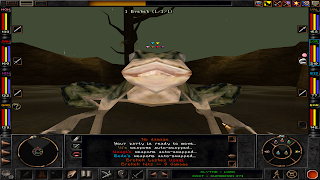 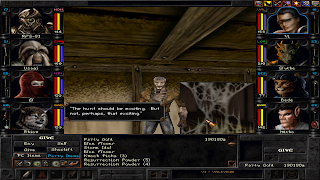 How and why the storekeeper from the swamp would be lying in wait in a hidden room inside the T'Rang stronghold, and just sit around waiting for me to get a hidden idol that no-one knows about so he can blackmail me into killing a frog, is a mystery that I will leave to the philosophers.

Whatever.  I've got the idol, so now it's back to the Trynnie stronghold.  Problem, the Shaman isn't where I last saw him.  Hmm.  It's been a long time since I've been to Trynton, so I wander about trying to find him.  I find a locked room with a treasure chest in it which I'd seen before but forgotten about - that's doubtlessly where the Helm of Serenity is.  But no Shaman.  Eventually the random encounters drive me nuts and I check the net - ah yes, there was a platform n Trynton that looked like I should put something on it.  I had forgotten about it because the last time I saw it was months ago. 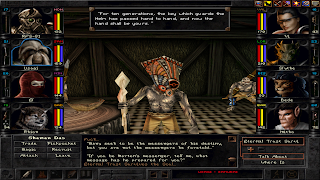 I put the idol on the platform and - behold!  Here's the Shaman hiding behind a locked door for no apparent reason.  Maybe he likes to jump out and scare small children.  He gives me an exposition dump then hands me a key, which in turn lets me open the locked chest and...bingo!  Helm of Serenity.

Now it's back to Marten's ghost. A few more boring random encounters later, and I'm finally the proud owner of the Destinae Dominus. 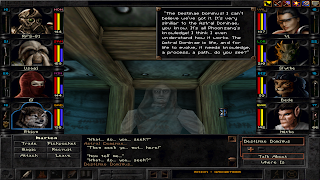 Marten explains that I needed the Helm of Serenity because the Destinae Dominus contains all the knowledge of the universe, which will send an unprotected person mad. This is why he was called "Mad Marten", and he wants to save us from the same fate. Ok, I suppose that makes sense.
I have someone in the group equip the helmet, pick up the Destinae Dominus and...everyone promptly goes insane, including the guy wearing the helmet. What?

I fiddle around with the inventory for a while, but every time I pick up the Destinae Dominus everyone goes mad. I've got the stupid helmet, there's only one helmet not 8, so what am I supposed to do??? ARRRGG!!! Ok, check the net.

Thoughts:  I had not appreciated how many "open world" RPGs are actually quite linear.  Even when the players technically can go anywhere they like, the Developer can be pretty confident of what level the player will be when they go to each area.