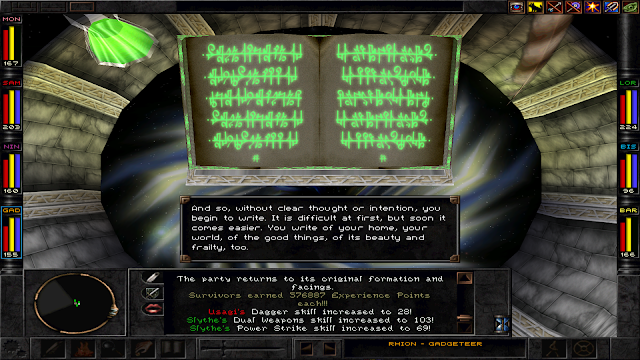 After 180 hours I have finally finished this stupid thing!  I still cannot believe just how utterly tedious and painful this game became.

By comparison, in 180 hours I could have read the Bible, War and Peace, Atlas Shrugged, the Lord of the Rings and Gone with the Wind, and STILL have enough time to watch all 3 extended edition LOTR films - twice. I cannot think of any other medium that is so blatantly indulgent with, if not outright abusive towards, its audiences' time.  I would happily pay twice the price for this game to be edited to half the length.  Or even better, shorter than a Tolstoy novel. But I get ahead of myself - let me tell you the story of the ending... 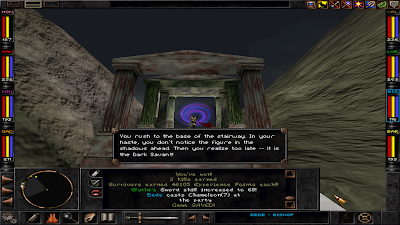 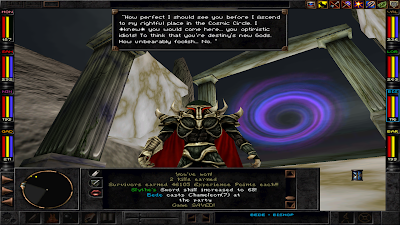 When last I blogged, I had completed all the steps necessary to unlock the gate to the Circle of Ascension when...PLOT TWIST!  It turns out that, this whole time, the Dark Savant's evil plan was to stand next to the gate and wait for me to open it.

Oh what a villainous mastermind he truly is.  I can only assume he brought a few good books to read because he must have been waiting for AGES - perhaps he read the Bible, War and Peace, Atlas Shrugged etc etc.

The Dark Savant attempts to explode the bomb at Arnika Tower, except I've disarmed it.  This makes me wonder what would've happened if I hadn't disarmed the bomb - presumably we'd all die in the explosion, although considering we're standing NEXT to the Dark Savant when he pushes the button, that seems a little silly.  Whatever.

When the button doesn't work, rather than try to kill us or deal with us in any way, the Dark Savant turns around and enters the portal.  Bella, whom I forged an alliance with about 150 hours ago, then appears and helpfully informs us he knows where the Dark Savant just went (i.e. into the massive portal directly in front of us).

Naturally we follow him, and find the portal leads us...somewhere else... 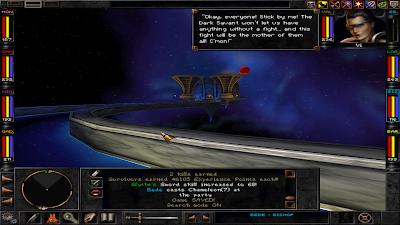 And so we arrive at the Cosmic Circle, a land of...well, no land After walking through an empty floating castle, we find ourselves walking around the rim of a small gladiatorial-looking arena, in which we see the Dark Savant and Aletheides, the Robot Guy who keeps popping up, in mid-argument. The Dark Savant demands to know where the Cosmic Lords are, Aletheides says they have "left" because the time has come for all the old Cosmic Lords to step aside so that new ones can be created.  The Dark Savant then kills Aletheides, ensuring that the writers never have to answer the question of "who the hell is Aletheides and why has he been randomly turning up since Wizardry VI?" 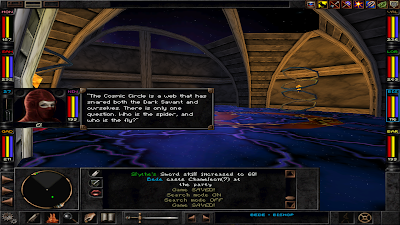 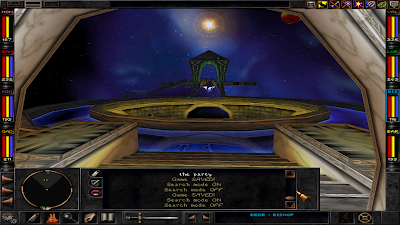 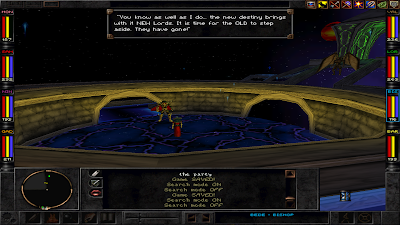 Bella rushes us to a large glowing book, the "Cosmic Forge" (the namesake of Wizardry VI) in which we can re-write history and get rid of the Dark Savant before he kills us all. 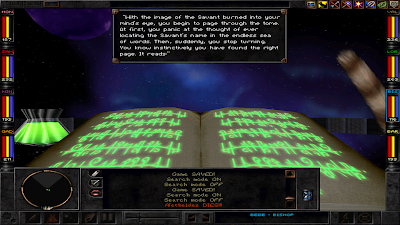 Approaching the book we read and learn...DUN DUN DUUUUUN!  (spoiler) that the good and wise Phoonzang, the God who was guiding us from award, IS the Dark Savant!

The Dark Savant, Bella and Vi all then have a discussion in which the Dark Savant reveals that it was he who created life and created the McGuffins three so that mortals could one day become Cosmic Lords.  The Cosmic Lords were so annoyed at him that they threw him out of the Cosmic Circle.  Over the years, Phoonzang became bitter and angry and wanted to get back into the Cosmic Circle and SHOW THEM AAAALLLLLL.

We're then offered a choice.  And just like in Wizardry VI and VII it determines which ending we get.  This is exactly the same mistake Mass Effect 3 made - we've been making decisions now for 3 games - who we ally with, who we don't, who we kill, who we save, but now none of that matters. The ending comes down to which flavour ice-cream we choose at the end.

I know Wiz 8 is an old game, but there's no excuse for this - both Wizardry VI and VII avoided this problem by linking the ending to your actions IN-game not at the END of it.

I choose the third one, but unsurprisingly the Dark Savant knocks the pen out of my hand and I have to fight him, with assistance from both Bella and Vi. 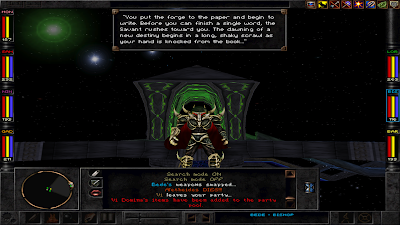 The Dark Savant, destroyer of worlds, creator of mankind and entity who was capable of killing us by waving his hand at the end of Wiz 7...is depressingly easy.  Wiz 8 - you just do not know how to scale encounters to level.

With the Dark Savant dead, we pick up the pen write. 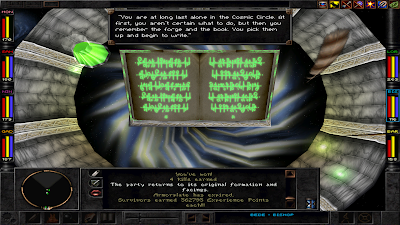 We write peace for the people and races of Dominus, even the Rapax whom we were gleefully killing earlier.  We then write new races, new planets, new galaxies and become new Cosmic Lords of all creation. 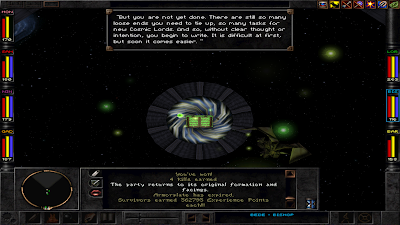 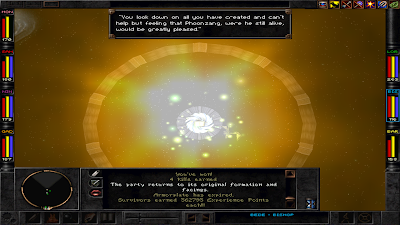 And that's the end of the game!

Naturally, after choosing this ending I go back and try out the other two.

There's the little question of why undoing history erases everyone else from existence (including the Dark Savant) but not us, but let's ignore that shall we?

We then write a new creation with Phoonzang leading the way, where everything is wonderful and awesome and we forget about accidentally killing everyone we ever knew in an attempt to avoid a fight that we couldn't avoid anyway.  I think I will call this the "less optimal ending". 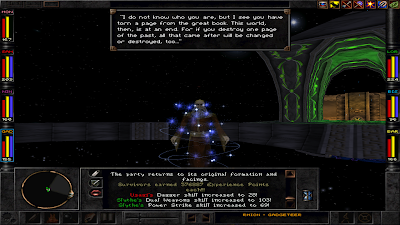 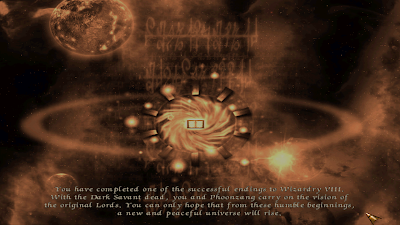 Finally, of course, there's the evil ending.  Siding with the Dark Savant.

First, we write nice things happening to people.  Then we decide that it's more interesting when they kill each other, so we write all sorts of horrible shortages and diseases that lead to war and suffering.  Because why not? 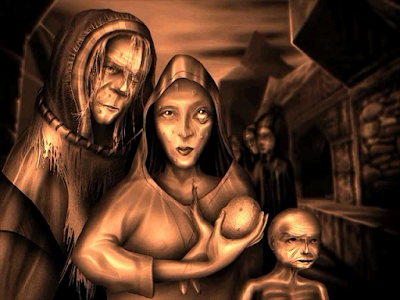 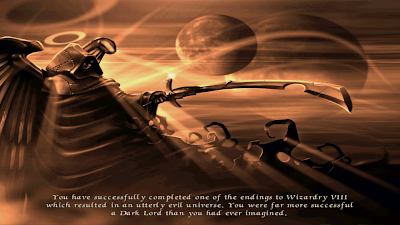 Before I finish, I decide though that I will go back and check out the Rapax Queen, which I referred to HERE as being unable to open the gate.  If anyone is wondering, you can in fact unlock the gate (it's just very touchy about where you click), although the Rapax Queen basically says "thank you for freeing me, my husband put me in jail because I spoke against the alliance with the Dark Savant".  So it's not exactly plot-central.


And that is the game!

Coming soon - a full review of Wizardry 8.  And then I fill finally and thankfully move on to something else.

Final thoughts:  Not linking the ending to our actions throughout the game was quite lazy, and interesting that it's the same thing that Mass Effect 3 did.  I don't think anyone was expecting hundreds of different possible endings (although Wasteland 2, and many other games, have provided for that), but at the very least the ending should not turn entirely upon the very last decision you make.