After a short interlude caused by the necessity of earning a living, I have returned to my comfy gaming chair with my next game - Simon the Sorcerer 2! 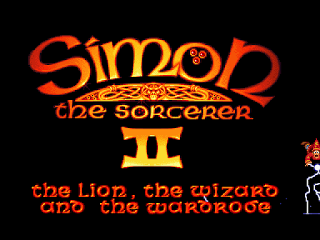 I avoided playing this in the 90s because I heard it fell into the "unfairly hard" end of the point-and-clock spectrum.  But with the advent of internet walkthroughs I have played and finished the first Simon the Sorcerer, so now it's time for number 2.

You may say it's cheating.  And it is, but really so is brute-searching every combination of item and object.  Yet only one of those two options is fun.  So let's begin...

Simon, having returned to Earth at the end of the first game, is sent back to the magical world of...actually it doesn't have a name...by the ghost of the evil Wizard Sordid.  Simon must find a way back to earth using only his wits, 4th wall-breaking humour and inexplicable occasional magic powers.  And his point-and-click interface.

A few minutes into the game we learn the following: 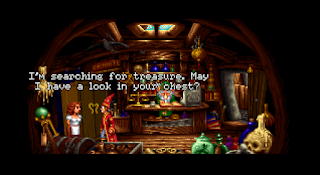 Yes, she has tits.  Girls have tits.  Hohohohoho.

The puzzles are mostly obvious, with an emphasis on exploration rather than arcane logic.  Solving the puzzles mostly requires you visiting all of the locations then applying information/items from one spot to another spot.  The pacing of this works quite well, because you can't just blow through all the puzzles in one location in one go.

It's impossible to give you an idea of the normal puzzle-difficulty without some examples, so here are a few SPOILERS:
So a pretty good level of difficulty.  Not extremely obvious, but you'll probably figure out the answer fairly quickly.  Except...

...except when you won't.  I can see why this game has a reputation for "what the hell?" puzzles.  In a few places the logic here makes absolutely no sense and you'd have to either brute-search your way through or looked for a solution.  For example (SPOILERS):
There aren't too many of these but when they happen the entire game screeches to a halt and you want to throw things at the screen.  Thank God for the internet. 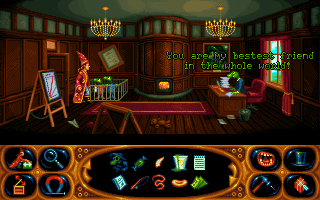 I think he's referring to the wi-fi connection

It's a good point-and-click from late in the "golden point and click" era.  It's more playable than Monkey Island because of the F10 function and a better balancing of objects/items/information per section.  It probably has a few more annoying impossible-puzzles than the Lucasarts games, but not too many more, and with the internet that's not the hassle that it once was.

So yes, it's recommended.  Probably its biggest failing is that Simon is not really likeable; he's very smug with his own genius but most of his "wit" involves repeating things with a sarcastic tone of voice.  It's interesting to compare to Monkey Island because mechanically, StS:2 is probably a better game.  But it's less enjoyable because the story-telling isn't quite as good.


Last word:  Mechanically superior 90s point and click adventure game.  Not as good at storytelling as the greats of this genre, but to be fair, that's a high bar.  Use the net if you get stuck, which thankfully won't be too often.