November 13, 2017
I need a break from Wizardry 8, the game has turned into a very slow grind.  An awful lot like Wizardry VI and VII, now I think about it.

So it's time for something a bit different, and that something is Out There, another iOS game that bucks the trend of iOS games being "free to play", too easy and no good. 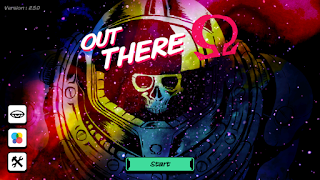 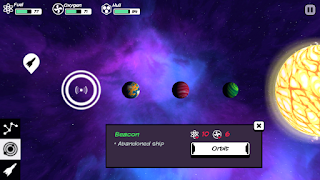 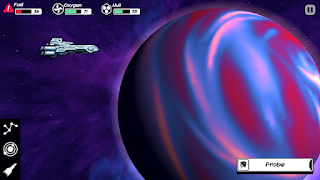 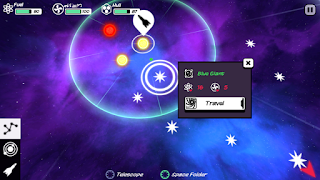 Each turn there are a handful of actions open to you, each action consumes one or more of the three primary resources.  This means that you have to spend resources to get resources - worse (from the protagonists' perspective) there is no guarantee that you'll come out ahead on each collection.  The point of the game is to try and consistently collect resources without going backwards.  If you spend more resources than you gain two or three times in a row, it's usually game over.

So how can the player ensure they don't go backwards?  Well, at the start of the game you can't - all you can do is play the odds.  The game gives you some information about each solar system/planet before you go there (e.g. "yellow dwarf" or "gas giant") that helps give you an indication of what you'll find there.  But it's an indication only, not a guarantee.  Eventually your luck will run out, and you will die.

The idea is that before that happens, you will collect secondary resources that will allow you to reduce the overall resource consumption rate.  This happens by visiting planets, which on certain random encounters will give you a new technology.  You can then use the various minerals and other tertiary resources to build one of those new items of technology, which will (broadly speaking) either reduce overall consumption rate, or increase available information about nearby solar systems/planets.

The final catch to note is ship space.  Each ship has only so many slots available; each slot can house one piece of technology, or store one lot of a tertiary resource.  Ship space is, again, in tight supply - which means you are always playing the odds on inventory management.  Should I build this new technology, or leave the space available to store fuel?  Again, as the game progresses, you will find abandoned ships that increase the number of available ship slots.  But often you'll be facing agonising inventory decisions that require you to balance risk/reward. 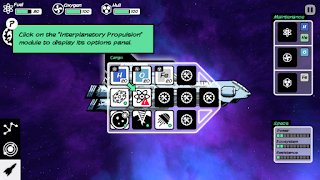 Mechanically speaking, there's only one point left to note - the "galactic language".  As you travel the galaxy you will meet strange creatures and read signs left on strange artefacts.  All of these creatures/signs are written in the "galactic language", which is basically a substitution code (it has no grammar to speak of).  Creatures in particular will ask you a question in the galactic language, to which you can "approve" or "disapprove".  Get the question right, and they'll give you something nice.  Get it wrong, and they'll give you nothing.  Either way, you will usually learn one word of the galactic language per encounter.  So at the start the language is gobbledegook, but as the game progresses you can start to make educated guesses as to what is being said. 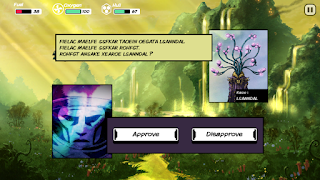 The clever part, though, is that the galactic language resets each game - so in each new game you'll be starting out at the same position.

So from this description you've probably seen the key rogue-like hooks - permadeath, random encounters, a random map.  But there's one thing missing - combat.

That alone makes this game refreshingly unique.  It also gives your inventory management decisions immense weight, because they shoulder the sum total of the gameplay.  This brings me to the best part about the mechanics of this game - it gives the player constant, significant gameplay choices.  There is rarely one clear answer, you have to make your decision based on the information that you have to hand and hope your luck holds.  It's surprisingly enthralling.

But this comes with two negatives:
Overall, mechanically I rate this game.  It's unique, it's engaging and its challenging.

But as I foreshadowed, the really interesting part here is how the mechanics interact with the game's aesthetics. 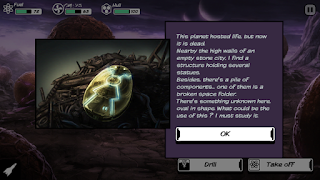 This is a game about individual insignificance.  It is tempting to say that it is about death, but that isn't really accurate - it's about how your death doesn't matter.

The plot begins with you waking from cryosleep, you've drastically overshot your intended voyage end, and now you're somewhere "Out There".  You come across a large, vaguely 2001-esq cube that speaks to you in a language you cannot understand.  It implants alien technology into your vessel (a hyperdrive, essentially), and imprints in your mind a star system on the other side of the galaxy.

As you travel, you meet alien lifeforms, all of whom speak the same language, but you cannot understand any of them.  You find technologies from crashed ships, and find abandoned vessels.  You'll come across aggressive alien ships - far larger than your own and against which you have no defence.  You're constantly reminded that you don't know how long you've been asleep, and that you don't truly know what awaits you on Earth.

Everything is designed to make you feel insignificant and disconnected.  You are alone.  You cannot communicate with anyone.  Everyone else understands this universe and their place in this universe except you - you do not belong here.  It's tempting to look at the sci-fi and ship management aspects of this game and compare it to FTL, but thematically it's closer to No Man's Sky.

Unlike No Man's Sky however, the mechanics of Out There support its theme, particularly in the early game.  The game is unfair, because life is unfair.  The player cannot see much of their surroundings, because we do not understand much of our surroundings.  The player lives only while their luck holds, because the game is saying that you do not belong here - you are a fish out of water leaping from puddle to puddle. 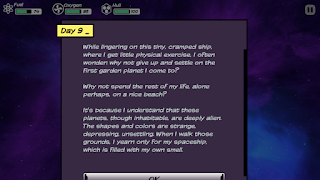 Good writing 101.  In approx 80 words Mi-Clos addresses a plot hole, characterises the protagonist, motives the player and reinforces the theme of "not belonging"

The only way to advance from this predicament is to adopt the technologies of those who do understand this world and have adapted to survive in it.  But once you have done that, the game is at a loss for what it's trying to say now.  It's not a power fantasy, it's not an execution challenge - there doesn't really seem to be a point in playing any longer.  Arguably this supports the game's nihilist philosophy, but it feels less like the game is making a point and more like it's run out of things to say.

Still, that part of the game is comparatively brief, and the overall experience is still well worthwhile.

Overall I recommend it, provided you've got some patience.  Bonus points for proving that neither sci-fi nor good games require combat.

Recommended if:  You like hard games, hard sci-fi and have patience.  Bonus if you enjoy reading, there's not much text, but there's very little animation.

Not recommend if:  You're looking for something fun and mindless.